Meeting of the Kazakhstan-Austria Business Council 2020 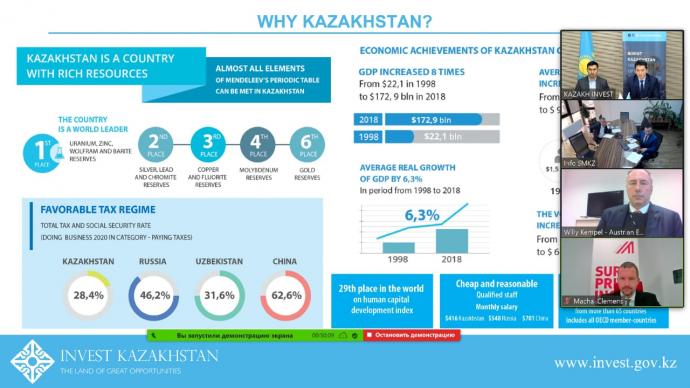 On 28 October 28, an online meeting of the Kazakhstan-Austria Business Council (KABC) was held with the participation of representatives of the business circles of the two countries.

During the meeting, the parties discussed topical issues aimed at developing economic ties between the two countries.

In recent years, the Kazakhstan-Austrian cooperation has shown positive dynamics. Currently, there are about 50 enterprises with the participation of Austrian capital operating in Kazakhstan. The volume of Austrian investments in the Kazakhstan’s economy over 15 years amounted to over 5.7 billion US dollars.

Within the framework of the meeting, the topics of cooperation in the field of machinery building, digitalization, energy efficiency, green economy, agro-industrial complex and the expansion of mutual trade were discussed. The practice of mutual participation of representatives of the engineering industry in bilateral events held in Kazakhstan and Austria was positively assessed. In particular, Austrian representatives took an active part in the 8th Forum of the Union of Mechanical Engineers of Kazakhstan held in Nur-Sultan on September 20-21, 2020.

Chairman of the Union of Mechanical Engineers of Kazakhstan M. Pshembaev noted the importance of strengthening cooperation between the business of the two countries.

Vice-President of the Austrian Economic Chamber R. Schenz emphasized that Kazakhstan is Austria's priority partner in the region and Austrian firms are ready to invest in the country's economy.

The Kazakh side noted the importance of attracting advanced Austrian technologies to the Republic of Kazakhstan and developing human resources.

Following the meeting, the parties signed the Action Plan of the Kazakhstan-Austrian Business Council for 2021. This document is aimed at strengthening bilateral relations in various spheres of the economy.

Also during the meeting, the representatives of the business community received additional information on the conditions and opportunities for deepening trade and economic cooperation, establishing direct contacts between companies of the two countries.