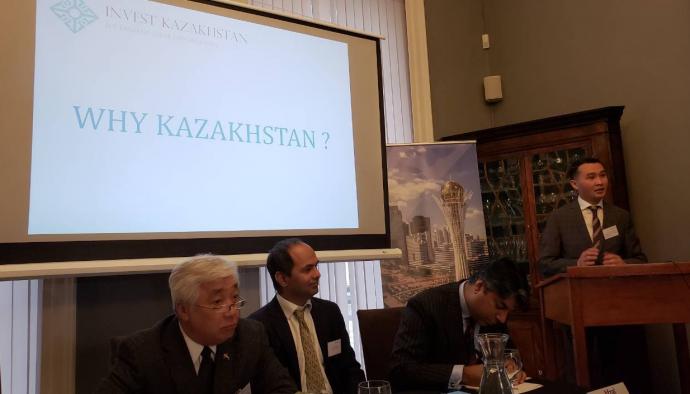 In London, at the headquarters of the consulting company British Expertise International, with the support of the Embassy of Kazakhstan in the UK, a seminar was held on the investment opportunities of Kazakhstan.

The Kazakh delegation was headed by the chairman of Kazakh Invest, Saparbek Tuyakbaev, representatives of RSE Kazvodkhoz, BI Group, Eurasia Gold Inc, Development Bank of Kazakhstan and other organizations.

In his welcome speech, S. Tuyakbaev spoke about the investment climate in Kazakhstan and the prospects for implementing business projects in the country. In particular, the participants of the event were provided with detailed information on business opportunities, legislative support, competitive advantages for attracting foreign investments, as well as were demonstrated top 50 priority investment projects approved by the Government. S. Tuyakbaev called on British businessmen to take an active part in the implementation of projects in Kazakhstan.

In their turn, the British companies expressed interest in infrastructure projects implemented by the Kazakh side in the framework of the Chinese initiative "One Belt — One Way." British businessmen showed a special interest in projects in the fields of agriculture, mining, engineering, renewable energy. Perspective areas of cooperation between the two countries are also represented by IT, digital economy, e-government, petrochemicals, processing industry, education, healthcare and others.

According to Vomic Nur Shah, the Regional Head for CIS and Asia at UK Export Finance, "the dynamics of bilateral trade cooperation between Kazakhstan and Great Britain has a positive trend, the volume of financing for projects with Kazakhstan has been increased from £1.25 billion to £3 billion with the possibility of receiving financing in tenge."

Ambassador of Kazakhstan to Great Britain, Erlan Idrissov noted that:

"Kazakhstan is becoming more open and attractive country for doing business with a favorable investment climate. Large-scale changes are taking place in the country, allowing Kazakhstan to become one of the most convenient countries for investors in the future. A striking example of consistent reforms is the introduction of the principles of British law into the structure of the Astana International Financial Center and the establishment of rules for doing business in accordance with the best world standards."

The Trade Envoy of the Prime Minister of Great Britain for Kazakhstan, Baroness Emma Nicholson, noted the successful cooperation of Great Britain and Kazakhstan in the implementation of investment projects, including in the areas of financial services, agriculture, mining and food industries.

The visit of the Kazakh delegation continued with a series of bilateral talks with British colleagues. For instance, on the fields of the event the project "Construction of distribution networks of drinking water of national importance" was discussed in detail, agreements were reached on joint implementation of the project, the preliminary cost of which is about $2 billion and the initial documents were signed.