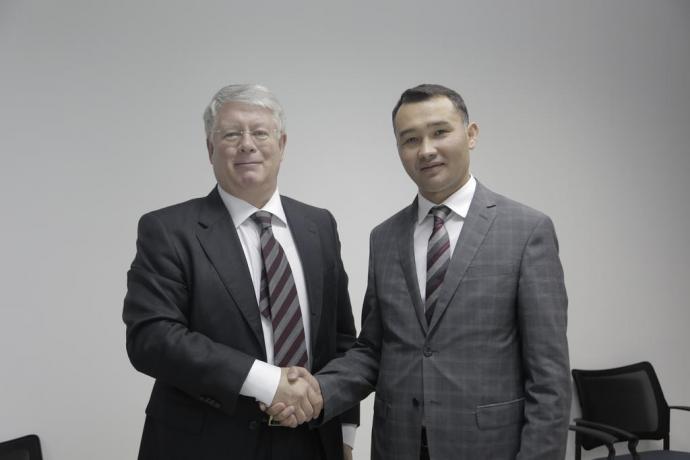 A meeting was held in Astana between the Chairman of the Board of «Kazakh Invest» Saparbek Tuyakbayev and the Ambassador Extraordinary and Plenipotentiary of the Russian Federation in the Republic of Kazakhstan Alexey Borodavkin.

The meeting was also attended by the Trade Representative of the Russian Federation in the Republic of Kazakhstan Alexander Yakovlev.

The parties discussed issues of deepening the investment cooperation between the countries within the framework of the Eurasian Economic Union. In the course of the meeting the head of «Kazakh Invest» noted that in accordance with the National investment Strategy Russia was among the 11 priority countries for investing in Kazakhstan. The Russian Party was provided with actual investment proposals on the territory of the Republic of Kazakhstan for review.

In the course of the meeting an opportunity of creating a special economic zone on the territory of “Baikonur” complex was discussed as well.

«Russian investments create new jobs in Kazakhstan. These enterprises make contribution to training of Kazakhstani employees who complete a preliminary course of professional and technical training», - Alexey Borodavkin, the Ambassador of the Russian Federation in the Republic of Kazakhstan, emphasized during the meeting.

The Parties discussed opportunities of cooperation within the framework of the agreements, adopted in the course of the 5th Caspian Summit in Aktau as well. In particular, the parties expressed interest in the realization of tourist projects at the Caspian seaside. Besides it, promising directions opened – development of port services, fishing industry, maritime traffic and so on.

The Russian Ambassador noted that additional impulse to the development of economic integration would be given by upcoming joint key events this year. These include scheduled meeting of the Intergovernmental Commission  in Kazan, the Council of the Government Heads of the CIS in Astana and XV Forum of Interregional Cooperation with participation of nation leaders in Petropavlovsk.