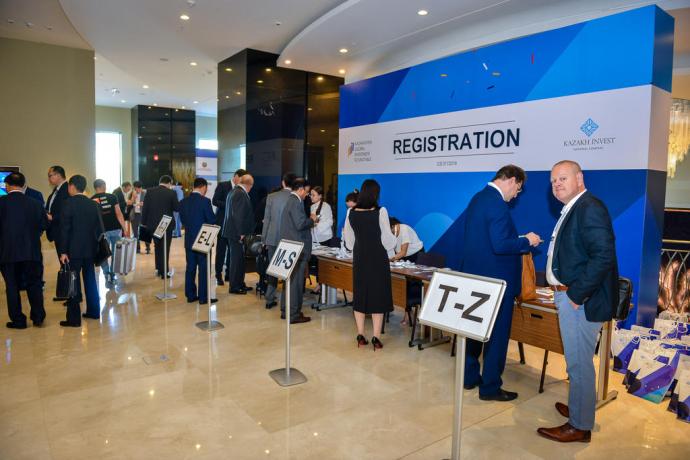 More than 600 heads of the world’s largest companies and domestic business, government agencies, world politicians, experts, representatives of international organizations and the diplomatic corps take part in KGIR-2018. 60 investors fr om Turkey, 43 from the USA, 37 from Germany, 60 from the UK, 49 from China, 28 from France, 30 from the Russian Federation, 74 from the UAE and others came to Astana to discuss the investment development of Kazakhstan.

The main purpose of the event is to present the investment opportunities of Kazakhstan, to discuss the policy of Kazakhstan in the field of investment, economic development and competitiveness. KGIR-2018 will consider the first results of the National investment strategy of Kazakhstan, adopted in August 2017.

The program of the KGIR Round table 2018 consists of a plenary session on such topics as: “Kazakhstan: meeting new challenges” and 8 thematic sessions (“Creating new markets for a diversified economy”, “the logistics potential of the Eurasian region”, “improving the efficiency of the privatization program in Kazakhstan”, “the energy potential of Kazakhstan-investments in a new stage of development”, “Agro-Industry: ensuring food security on the new silk road”, “Astana international financial center-entry to the Eurasian financial markets”, “the Eurasian agenda of digitalization – development of industry infrastructure 4.0”, “Opportunities of metallurgy and mining”). The plenary session is held with the participation of the Prime Minister of Kazakhstan and in partnership with the world's largest business channel “CNBC”. In addition, on this day, together with Bloomberg, a round table for the participants of the event will be held, wh ere more than 20 heads of transnational companies will discuss topical issues of investment development of Kazakhstan in the format of a business conversation.

Within the framework of Kazakhstan Global Investment Roundtable, there are 32 commercial documents were signed for a total amount of 4.7 billion us dollars, which are able to attract investments in high-tech projects and cover almost all sectors of the country’s economy:

- in the field of mechanical engineering: a roadmap for the implementation of a project for the production of cable products between the Akimat of the Karaganda region and the company Hebei Hua Tong Cable, etc.

- in the sphere of agro-industrial complex: memorandum on cooperation between the group of companies Eursian Agro Holding and Australian company Cedar Meats Australia on the implementation of the project of a meat processing plant. In addition, a memorandum of understanding between Kazakh Invest and the Turkish company Agro Best Group was signed within which a plant for the production of plant protection products will be opened. In the framework of another memorandum of understanding between Kazakh Invest and the Turkish company Dal Holding, a greenhouse complex of 200 hectares is planned to be built with the creation of a vegetable storehouse, a gas turbine power plant. Kazakh Invest also signed a memorandum with the Chinese company Hangzhou Qiandaohu xinLong Sci-tech for the breeding and processing of sturgeon fish in the amount of 12,000 tons of fish and 2,000 tons of caviar. Also between the Akimat of Almaty region and “Phoenix Global DMCC” a memorandum on the creation of a cluster on fruit processing was signed.

- in the field of oil and gas chemistry: an agreement was signed between Kazakh Invest and West Hydrocarbons Commercial Investment, within which a modern oil refinery will be built. Another signed agreement in this field was a memorandum of understanding between the Akimat of Atyrau Oblast and the Singapore Company WestGasOil for the implementation of the methanol and olefin production project in the Special Economic Zone “NINT”.

- in the field of logistics: an agreement on cooperation between the companies Semurg Invest and Fund Partnership Fund Invest on the implementation of the construction of a multifunctional sea terminal in Sarzha port in Kuryk.

- in the retail sphere: within the framework of the memorandum of cooperation between the national company Kazakh Invest and the French company Decathlon Kazakhstan a chain of shops will be established for the sale of sportswear and equipment, followed by the localization of production (300 million US dollars, 4,800 jobs).

- in the sphere of the mining and metallurgical complex: a memorandum of understanding between the Akimat of Zhambyl Oblast and the Turkish company Dal Holding on the construction and commissioning of a mining and processing plant for the production of barite concentrate with a capacity of 75,000 tons per year in the Zhambyl region.

In addition, an agreement was signed to implement eight projects with transnational companies from 13 countries, such as France, Germany, the United Arab Emirates, Turkey, Poland, Russia, China, etc.

The Kazakhstan Global Investment Roundtable (KGIR) is an exclusive gathering of representatives who have arrived by invitation from approximately 500 organizations, namely, a meeting of international and Kazakhstan commercial and financial executives, investors, opinion leaders and representatives of international media. This forum was convened by the Prime Minister of the Republic of Kazakhstan Bakytzhan Sagintayev, with the participation of key government officials responsible for economic development.