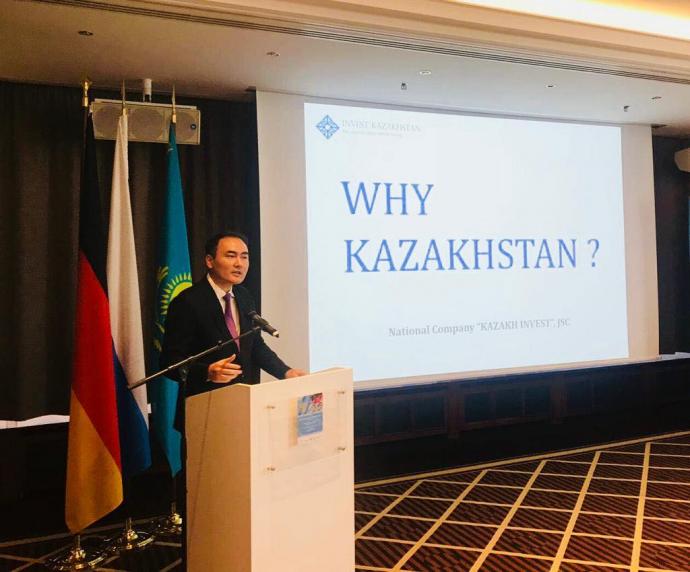 On September 12 within the framework of large-scale work on attracting German investments and technologies to the economy of Kazakhstan an economic forum on the subject Investment Opportunities for German Companies in Kazakhstan Based on the Example of Regions was held in Munich. The event was organized by KAZAKH INVEST NC JSC with organizational support of the Embassy of Kazakhstan in Germany.

The German party was represented in the forum by Franz Josef Pschierer, the Minister of Economy and Technologies of Bavaria, Eberhard Sasse, the President of the Commercial and Industrial Chamber of Munich and Upper Bavaria, members of the land government, representatives of economic associations of the region as well as managers of around 90 German and Bavarian companies.

The Kazakhstani delegation was represented by Bolat Nussupov, the Ambassador of the Republic of Kazakhstan in the German Federal Republic, Marat Birimzhan, the Deputy Chairman of KAZAKH INVEST NC JSC, Zhasulan Suyunchaliyev, the Deputy Akim of Atyrau region, managers of branch departments of Almaty and Kostanay regions as well as industrial enterprises Chemicheskiy Park Taraz JSC and Oral-Kabel LLP from Zhambyl and West Kazakhstan regions.

The practical implementation of the orders of the government of the country on ecouragement of foreign investments to the priority projects in the Republic of Kazakhstan for further modernization and industrialization of the Kazakhstani economy became the main target of this forum.

In his greeting speech the Ambassador Bolat Nussupov familiarized the participants of the forum with the conducted in the country social and economic reforms that contribute to improvement of the investment climate in Kazakhstan and ensures the protection of entrepreneurs’ rights. The key indicators and dynamics of improvement of Kazakhstan’s ratings on the line of international organizations and leading rating agencies were marked as well. Especial attention was paid to five global mega trends presented by the President of our state in the course of the recent Astana economic forum.

Minister Franz Josef Pschierer emphasized the increased role of Kazakhstan as a key commercial and economic and political partner of Germany in Central Asia. As per the words of the German politician Kazakhstan implements state programmes confidently, which create framework conditions for foreign investors. Due to this based on his words the Bavarian business is ready to increase its presence at the Kazakhstani market and actively participate in new trends and projects on digitalization of economic structures, energetic revolution, transformation of the global labour market based on the experience of federal land Bavaria.

In the course of the event Marat Birimzhan presented key investment projects in the priority branches. In particular, detailed information on the opportunities of running business in the Republic of Kazakhstan, on legislative support, competitive advantage for attraction of foreign investments in the context of the Development Strategy Kazakhstan-2050 was presented as well as the January message of the President of the state on the social and economic modernization of the country.

Within the framework of the forum presentations of economic opportunities of Almaty, Atyrau, and Kostanay regions took place. Peculiarities of the economy of the regions of Kazakhstan were specified in the speeches of the managers of the branch departments and concrete projects for potential investors from Bavaria were proposed as well.

Based on the results of the event KAZAKH INVEST NC JSC signed a Memorandum of Understanding with Bavarian Organization of Cooperation East-West (Ost-West-Wirtschaftsforum Bayern e.V.) meant to fill meaningfully the economic cooperation of two countries in the regional format as well as a Memorandum of Understanding and Cooperation with the Higher Land Economy Education Institution Weihenstephan (Hochschule für Agrarwirtschaft Weihenstephan), targeted at expansion of the interaction with Bavaria on professional training  in the field of  agro-industrial complex and development of  agricultural science in the Republic of Kazakhstan. Also, a Memorandum between KAZAKH INVEST NC JSC and Rohde & Schwarz GmbH & Co KG was signed for activation of the work on cooperation in the sphere of IT within the framework of the national programme of the Digitalization of Kazakhstan.

For information: Bavaria is one of the largest and industrially developed regions of Germany. The GDP of Bavaria exceeded 568 billion euros in 2017 only. The export share of the land is around 51%, which is evidence to high competitiveness of the manufactured products at the global market. In Bavaria there located head offices and production assets of such worldwide known German enterprises as Allianz, Siemens, BMW, Audi, MAN, EADS, Eurocopter, Linde, Adidas, Puma and others. Currently Bavaria accounts for over a half of the total goods turnover of Germany with Kazakhstan. The aspiration of the Bavarian companies to the cooperation with Kazakhstan is actively supported by the land government.