The US State Department Positively Assessed the Investment Climate in Kazakhstan 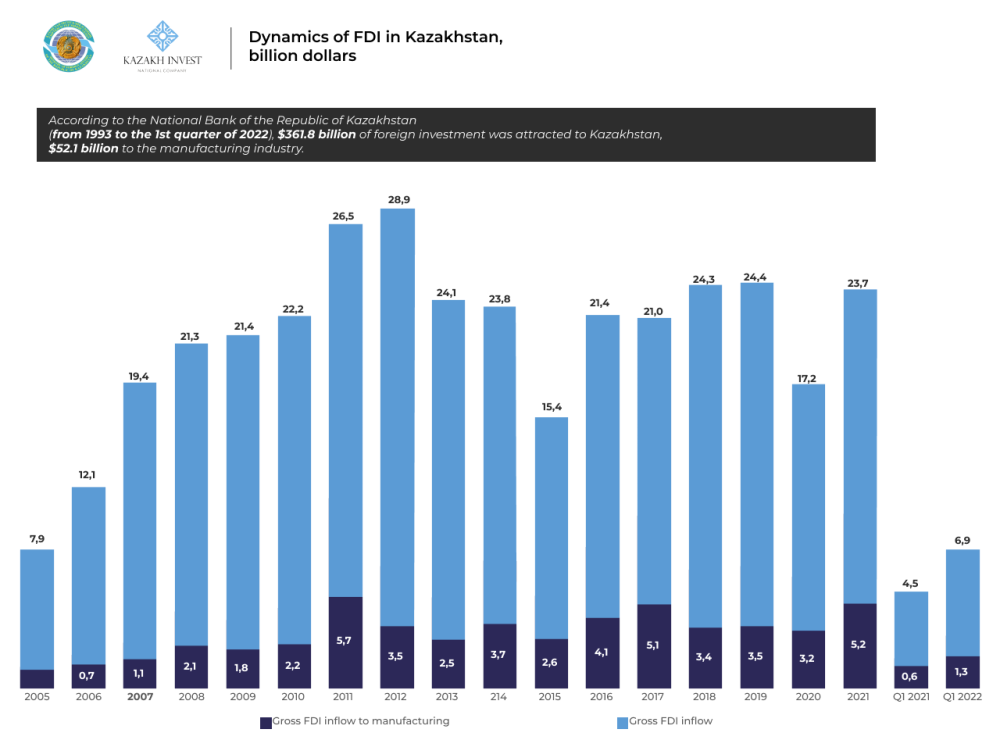 The U.S. Department of State has published a report on the investment climate of Kazakhstan for 2022.

A document posted on the US State Department website notes Kazakhstan's significant progress in building a market economy since independence in 1991. The US Department of Foreign Affairs positively assesses Kazakhstan's commitment to world investment standards specified in the OECD Declaration on International Investment and Multinational Enterprises, which contributes to the recognition of Kazakhstan by foreign investors as a reliable and law-abiding trade and economic partner.

The Government of Kazakhstan maintains an active dialogue with foreign investors through the Foreign Investors Council under the President and the Investment Climate Improvement Council chaired by the Prime Minister. Kazakhstan is a member of the World Trade Organization (WTO) and the Eurasian Economic Union (EAEU).

State Department analysts note the effectiveness of the measures taken to simplify the procedures for starting and running a business, such as online registration of any business through the egov.kz website, the introduction of a new type of investment agreement, and the restoration of a visa-free regime shortly after the pandemic regime for citizens of 54 countries, including the United States. The report notes that as investment preferences, companies operating in priority sectors receive tax and customs exemptions, in-kind grants, investment loans and simplified work permits, which send positive signals to the US and foreign investment community. International financial institutions also classify Kazakhstan as an attractive country for their activities.

The statements of the President of Kazakhstan on the need to improve the selection of judges and improve their qualifications, as well as the ongoing work to combat corruption in the country, were noted in a positive way. We welcome the fight against oligopoly, the work to improve laws and the legal regime in the field of protecting the intellectual property rights of investors, as well as the accelerated transition of Kazakhstan to a low-carbon economy.

The report states that in April 2019, the Coordinating Council for Attracting Foreign Investments was established, which was subsequently reoriented into the Investment Headquarters, in which the Prime Minister acts as Chairman and Investment Ombudsman. The Investment Committee of the Ministry of Foreign Affairs of the Republic of Kazakhstan and its subsidiary "NC "KAZAKH INVEST" JSC deal with investment climate policy issues and work with potential and existing investors, while the Ministry of National Economy and the Ministry of Trade and Integration cooperate with international organizations: the OECD, WTO and United Nations Conference on Trade and Development (UNCTAD). The establishment of the Astana International Financial Center (AIFC) by the Kazakh Government is especially noted on the example of the Dubai International Financial Center.

The possibilities of special economic zones in Kazakhstan, allowing foreign companies to establish enterprises in the FEZ, simplification of licensing procedures for foreign labor, and the establishment of a special customs zone regime that is not regulated by the rules of the EAEU, also have a beneficial effect on attracting investors.

At the same time, the report says that Kazakhstan is rapidly improving the use of labor skills at work, especially digital ones.

In the financial sector, according to the analysis of the State Department, there are no concerns for investors about the policy of remittances or the possibility of converting foreign currencies to transfer their profits. There is a freely floating exchange rate and a currency regime aimed at inflation. The IMF notes in this report that Kazakhstan maintains sufficient international reserves.

Among the factors negatively affecting the investment climate, according to the US State Department, are restrictions on foreign ownership in certain industries, difficulties with contracting and licensing, as well as insufficient protection of intellectual property rights. For example, under current law, foreign and domestic private companies can set up and own commercial enterprises. There are restrictions on foreign ownership, including a 20% limit on foreign media ownership, a 49% limit on domestic and international air travel, and a 49% limit on telecommunications services. The law also restricts offshore companies' participation in banks and insurance companies and prohibits foreigners from owning pension funds and agricultural land. Foreign citizens and companies are prohibited from participating in private security companies.

In general, the US State Department positively assessed the work being done to create a favorable investment climate in Kazakhstan.

In the period from 1993 to the first quarter of 2022, the volume of gross inflow of foreign direct investment in the economy of Kazakhstan amounted to $ 395.9 billion.

According to the National Bank of the Republic of Kazakhstan, in the first quarter of 2022, the gross inflow of foreign direct investment (FDI) into Kazakhstan amounted to $6.9 billion, demonstrating an increase of 54.1% compared to the same period last year.

At the same time, in the country breakdown, the top 10 countries-investors in Kazakhstan according to the results of the first quarter of 2022 are as follows:

Source: Investment Committee Ministry of Foreign Affairs of the Republic of Kazakhstan