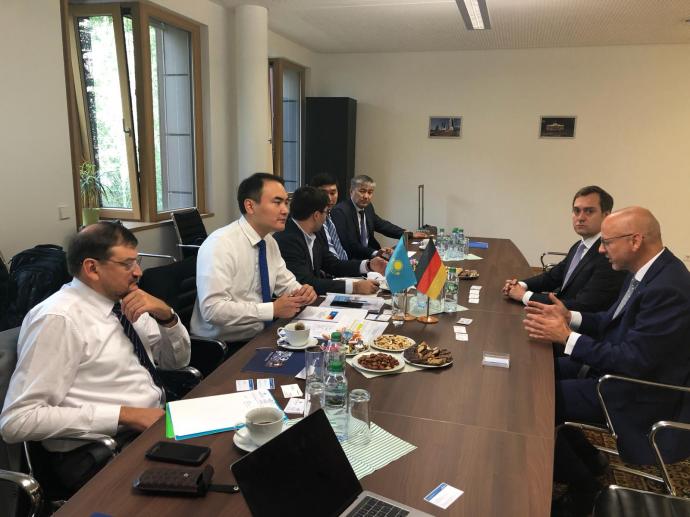 At a meeting with the managing director of BayWa AG company group Philip Trahtenberg the issues of cooperation in the field of agricultural product processing and construction of largescale wind-powered stations were discussed. BayWa (BayerischeWarenvermittlung) transnational company is engaged with equipment manufacturing for agriculture, construction materials, renewable sources of energy. The German company expressed its readiness to develop a concept of cooperation with Kazakhstan and have the first working visit to Astana. The holding is interested in investing into the construction of greenhouses using alternative energy sources.

In the course of negotiations with the managing director of  VIETZ GmbH company Markus Bennetberg the opportunities of closer cooperation in the sphere of gas, oil, and water pipeline installation on the territory of the Republic of Kazakhstan using the high-end technologies of the German company were discussed  as well as the prospects of creating a joint venture  in Kazakhstan for production of parts for the equipment produced by the German company. The Parties agreed to continue the dialogue in Astana in the course of the first working visit of the company’s management to Kazakhstan in the autumn of this year. VIETZ GmbH specializes in the production of machines and equipment in the oil and gas and utility spheres as well as welding aggregates.

A meeting with the manager of the representative office in the Middle East and Eastern Europe of  Linde AG, a transnational German chemical company, Christian Sharlach was held as well. Linde Group invested into the construction of the largest in CIS air separating plant  in Temirtau on the territory of Metallurgical smelter of Karagandy (nowadays ArcelorMittal Temirtau) in 2009. In the course of the meeting the project execution progress in Temirtau was discussed   as well as the plans of the company for the further activity in Kazakhstan.

During the negotiations with the regional director of INFINEON Technologies AG company Detlef Hudu issues of German industrial enterprises and health care system digitalization technologies transfer to Kazakhstan were discussed. The company informed about its plans to hold a presentation of its products in Astana and participate in investment projects in the sphere of digitalization. It was agreed about organization of negotiations between the company management   and branch departments of Kazakhstan.

At the meeting with a member of company management of MAX AICHER GmbH Thomas Shoemann prospects of cooperation in the sphere of steel production, waste processing, construction, designing as well as tourism were discussed.  As of now the company holds leading positions in Bavaria in relation to rebar production, processing and utilization of old cars and urban waste as well as in the sphere of designing and construction of urban and countryside infrastructure. The Kazakhstani party invited the management of the company to visit Kazakhstan to hold  subject negotiations.

The conducted negotiations filled the commercial and economic, investment relations between the two countries with new content and marked new prospects of interaction for execution of a number of projects which have certain advantages of the parties.

The parties expressed readiness to continue the dialogue and determine the exact spheres of mutually beneficial cooperation. The visit of delegation of NC «Kazakh Invest» JSC to Munich contributed to enhancement of economic interaction of Kazakhstan with the leading federal land of Germany – Bavaria in general.