One of the main promising areas for investment is construction of modern greenhouses.

Most of the greenhouses is located in the Turkestan, Almaty, Aktobe and Zhambyl regions.

Among vegetable crops, tomatoes and cucumbers are the most common and significant food products.

In total, consumption of tomatoes and cucumbers per capita was 18.5 kg, which accounted for 20% of the total number of consumed vegetables.

During the intercrop, Kazakhstan depends on imports of tomatoes and cucumbers

The total volume of imports of these vegetable crops exceeds the volume of exports by more than one and a half times.


The total consumption of tomatoes and cucumbers: 18.5 kg per person = 20% of the total volume

382 tenge/kg (19% cheaper than in the Russian Federation)

At the same time, it is worth noting that the total population of 9 Russian regions, bordering with Kazakhstan, is over 19 million people.

The total population of 9 Russian regions, bordering
with Kazakhstan, is over 19 million people.

Expansion of the greenhouse complex in the Almaty region

Construction of a greenhouse complex in the West Kazakhstan region

Construction of a greenhouse in the Pavlodar region

Construction of a greenhouse in the North Kazakhstan region 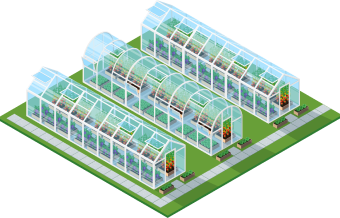 Potential Measures of State Support of the Projects

Exemption from customs duties on the import of equipment.

Exemption from VAT on the import of equipment under an investment contract or by credit method.

Investment subsidy of the Ministry of Agriculture for reimbursement of investment up to 25%.

Possibility to attract local and international financing with an interest rate in national currency from 6% per annum.