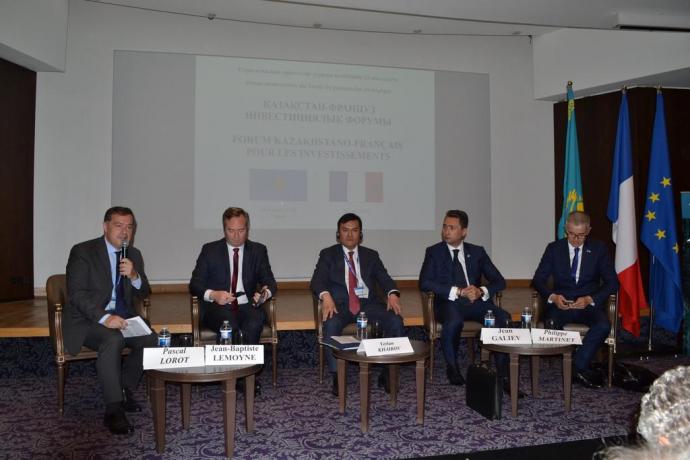 The Kazakhstan-France Investment Forum was held in Paris on May 28, with the support of the Embassy of the Republic of Kazakhstan in France and Kazakh Invest National Company. The forum featured a discussion of Kazakhstan’s investment opportunities and signing of a number of documents on cooperation.

The Forum was attended by the Minister of State attached to the Minister for Europe and Foreign Affairs Jean-Baptiste Lemoyne, Chairman of the Investment Committee of the RK Ministry of Investment and Development Yerlan Khairov, Ambassador of Kazakhstan to France Zhan Galiyev, Ambassador of France to Kazakhstan Philippe Martine, Chairman of the Board of Kazakh Invest Saparbek Tuyakbayev and representatives of the French and Kazakh business communities.

At the opening of the forum, the participants noted that French companies are interested in investing in Kazakhstan, which is a strategic corridor linking the Eurasian continent.

Ambassador Zhan Galiyev briefed the French forum participants on some points of the speech of the President of Kazakhstan N.A.Nazarbayev at the Astana Economic Forum, his Address "New Development Opportunities in the Context of the Fourth Industrial Revolution" and "Five Social Initiatives", which would be the most interesting for the international business community.

The Chairman of the Board of Kazakh Invest Saparbek Tuyakbayev noted that about 2/3 of GDP investments of the Central Asian countries are in Kazakhstan, which ranks first among the CIS countries in terms of attracted investments per capita.

S.Tuyakbayev also talked about the current support measures for foreign investors, including a wide range of financial instruments of the AIFC.

According to Kazakh Invest, world companies operating in Kazakhstan have access to a market of more than 500 million people. The multi-modal Eurasian transport corridor passes through Kazakhstan, including 5 railway and 6 automobile international routes, as well as the modern transcontinental motor road "Western Europe - Western China".

"Our transport corridors allow to deliver cargo from Asia (Lianyungang port, China) to Europe (Duisburg port, Germany) or back for about 10-15 days, which is 2-3 times faster than by sea. I can say that container transportation volume has grown 2-fold," noted Tyuakbayev.

50 niche projects in priority sectors of economy in accordance with the National Investment Strategy were presented to French businessmen. These investment proposals were developed jointly with Deloitte.

The forum also included a discussion at such sessions as "Kazakhstan as a platform for investment and export on the New Silk Road", "Tools for attracting foreign investment in Kazakhstan" and "Digitization of the economy".

In addition, Memorandums of Understanding and Cooperation were signed between ECM Technologies and Kazatomprom as part of the Investment Forum.