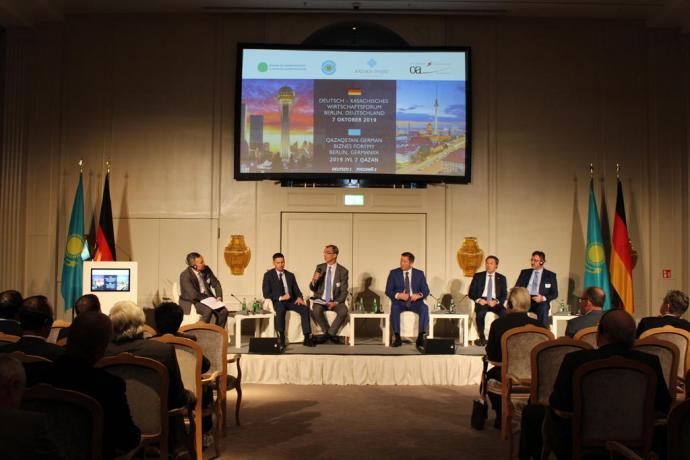 Investment agreements were reached during negotiations on the sidelines of the Kazakhstan-German Business Forum where the prospects for cooperation with such companies as Linde Gas, SMS Group, CLAAS Group, Masterrind and others were discussed.

It is planned that Documents on Projects implementation will be signed in December this year within the framework of the official visit of the President of the Republic of Kazakhstan Kassym-Jomart Tokayev to the Federal Republic of Germany.

Over 200 business community representatives from both countries participated the Forum. On the sidelines of the relevant events, some promising projects of investment and trade - economic spheres were considered, as well as specific tasks were achieved to highlight the opportunities and new horizons of mutually beneficial partnership.

The Kazakhstan delegation, which included representatives of government authorities and agencies, national companies and business interests, was headed by Roman Sklyar, the Deputy Prime Minister of the RoK.

The forum has become a practical platform for enhancing trade, economic and investment cooperation, giving impetus to the development of partnerships in such popular areas as IoT (“Internet of Things”), logistics, new niches of bilateral cooperation in the field of investment and trade and economic relations, the energy sector, development agro-industrial complex, geological exploration, economics, digitalization and greening of industry and urban infrastructure.

“In order to move away from the raw material vector of economic development, Kazakhstan has begun to modernize and industrialize the domestic economy. The foundation of the new policy is the creation of a base of industrial-innovative and green economy. In this context, the goal for Kazakhstan businessmen should be to attract companies from Germany to cooperate as leaders in the fields of new technologies and innovations. Particularly relevant is the development of new industries which to be created using digital technologies as well as the introduction of elements of Industry 4.0” - said Roman Sklyar, the Deputy Prime Minister of the RoK.

Today, Germany is one of the leading foreign economic partners of Kazakhstan. Over the past 14 years, German companies have invested about $ 5 billion. According to German statistics, trade turnover reached a historic high of € 5.1 billion at year-end 2018.

“Today, Kazakhstan is new opportunities and potential for profitable business. Growth forecasts for Kazakhstan are impressive. Thus, according to the EBRD forecast, GDP in 2019 can grow by 3.5%. Forecasts for 2020 also indicate that Kazakhstan is the growth engine in the Eurasian Economic Union. We are very pleased that the positive development also had a beneficial effect on the German-Kazakh economic relations: in the first half of the year we exchanged goods for € 2.7 billion. Kazakhstan still accounts for more than 80% of Germany’s trade with the Central Asian region” - said Manfred Grundke, member of the board of the Eastern Committee of the German Economy, General Partner of Knauf.

Additionally, together with the Eastern Committee of the German Economy, a draft Road Map for Trade and Economic Cooperation was developed with an appendix of the List of Investment Projects to be signed during the visit of the Head of State.

“This forum has become an effective platform for representatives of political, economic and expert interests of Kazakhstan and Germany. Kazakhstan is consistently making reforms aimed at improving the investment climate. An open dialogue with businessmen is ensured and the infrastructure for attracting investments is improved. I am sure that in the near future the results of the negotiations held on the sidelines of the forum will lead to the start-up of production facilities and the creation of new joint ventures” - said Ulf Vokurka, KAZAKH INVEST Independent Director.

In addition, today in Kazakhstan there are over 900 companies partially owned by Germany. Kazakh businessmen intend to expand existing cooperation through new projects.

The parties noted that via Kazakhstan, German business has a reliable partner in the Central Asian region. In addition, Kazakhstan can become a conductor of the economic interests of European countries in the region.

The business forum was organized with the support of the Ministry of Foreign Affairs of the Republic of Kazakhstan, KAZAKH INVEST, with the assistance of the Eastern Committee of the German Economy, the Federal Ministry of Economics and Energy.