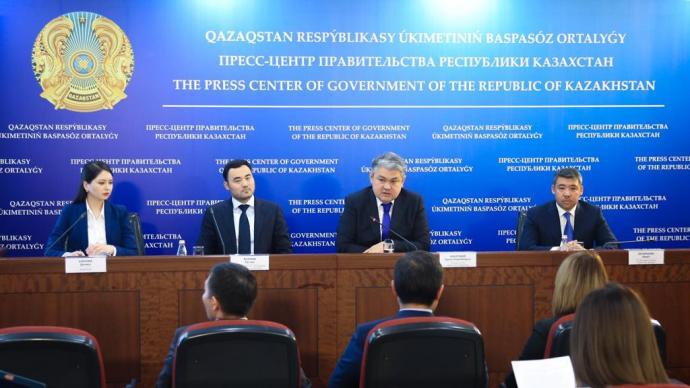 The Deputy Chairman of Kazakh Invest Rustam Issatayev shared about the measures for investment attraction during the press conference in Nur-Sultan.

29 projects with the participation of foreign capital were commissioned with support of Kazakh Invest between 2018 and the first half of 2019. By the end of the year, another 28 projects are expected to be put into operation. In total, 57 projects worth $ 5.1 billion and implemented jointly with the “anchor investors” and TNCs will create over 10 thousand permanent jobs.

In 2018, 27 projects worth $ 3.1 billion were commissioned with support of Kazakh Invest. Thus, projects like a 50 MW solar power plant in Zhambyl region, a cement plant with a production capacity of 1 million tonnes of cement per year in Kyzylorda region, Kazakhstan’s first dry camel milk production plant with a capacity of up to 100 tonnes of milk per day in Turkestan region were launched during the year. Other investment projects included railway wheels production (200 thousand wheels per year) in Pavlodar region, transformers production (100 transformers per year) in Nur-Sultan as well as modernisation of machinery building plant (8.5 thousand tonnes per year) in Karaganda region. Implementation of the projects created 6 thousand permanent jobs.

Based on the results of 2018, the largest number of projects was implemented in Almaty – 5 projects, in Pavlodar region – 4, as well as in Karaganda, Turkestan and Almaty regions – 3 projects in each region.

In 2019, Kazakh Invest plans to facilitate commissioning of 30 projects with the participation of foreign capital worth $2 billion. About 40% of the projects are related to new sectors of the economy - renewable energy and information and communication technologies. Total planned capacity of solar power plants will be 400 MW, wind power plants – 90 MW and hydropower plants – 25 MW. Total investment value of the power plants will be $680 million. Additionally, according to the key indicators of the National Investment Strategy 2018-2019, Kazakh Invest sets a goal of attracting at least 8 TNCs annually and creating 2 joint ventures with anchor investors (JV). 8 TNCs with investment projects worth $930 million were attracted and 2 joint ventures ($335 million) were established in 2018. Among the TNCs are Linde Gr. (Germany), Farm Frites (the Netherlands), Carmeuse Group (Belgium), China Triumph International Engineering (PRC), Phoenix Global (UAE), Yildirim Holding (Turkey), United Green (United Kingdom) and CG Corp. (Singapore). This year, Kazakh Invest targets companies, such as ECO-Culture (Russia), Tyson Foods, Valmont, AGCO (the USA), Servier (France) and Tonnies (Germany).

In general, over the past two years, Kazakh Invest has built “soft infrastructure” for investors by initiating work on clarifications of Kazakhstan’s legislation and procedures, achieving transparency of decision-making as well as reducing administrative burden. For instance, Kazakh Invest launched the unified national interactive internet resource - invest.gov.kz in Kazakh, English and Russian. The website not only provides all the necessary information about investments in Kazakhstan and niche projects, but also implements the function of a request platform. Kazakh Invest call centre for investors operates 24/7 at +7 717 2 620 620.

Between 2018 and 2019, Kazakh Invest provided over 1,100 consultations to investors. Within the Investment Ombudsman’s activity, Kazakh Invest received 91 appeals from investors on issues arising in the course of investment activities, of which 48 appeals were positively resolved, 13 - clarified in accordance with the current legislation, 30 - are being currently solved.

Kazakh Invest, acting as a “single negotiator” on behalf of the Government of the country, provides a full range of services for implementation of investment projects, including business registration, obtaining various permits and approvals necessary for conducting investment activities in the Republic of Kazakhstan.