Trade mission of the US Department of Commerce paid an official visit to Astana on October 25, 2018 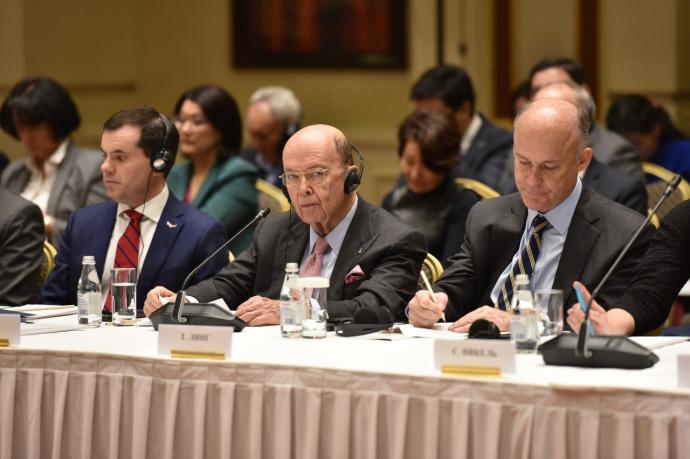 During the visit, a Kazakh-American business forum and the signing of eight bilateral documents were held.

The plenary session “US Trade Mission in Kazakhstan for the Development of Business Relations” was held with the participation of the First Vice Premier of Kazakhstan Askar Mamin and US Secretary of Commerce Wilbur Ross, heads of ministries and departments of the Republic of Kazakhstan, more than 20 heads of US companies. In addition to the plenary session, the event included 3 panel sessions on the following topics: “Infrastructure and Investments”, “Energy”, “Agriculture”.

Speaking to the participants of the meeting, Askar Mamin emphasized the visit of the President of the Republic of Kazakhstan to the United States in January, under which agreements were aimed on expanding cooperation between the two countries' business, as well as commercial documents totaling over $ 7 billion were signed.

It should be noted that as a result of the agreements reached, the overall economic indicators of Kazakhstan-US business relations have significantly increased. As an example, the positive growth dynamics is observed in the increase in commodity turnover between Kazakhstan and the USA by 29% (for the last 9 months), and the total inflow of investments from the USA increased by 44.7% (in the first half of this year).

US Secretary of Commerce Wilbur Ross, in turn, spoke positively about the Kazakhstani investment climate and said that Kazakhstan offers great prospects for US businessmen to implement investment initiatives and trade.

On the sidelines of the forum, eight bilateral documents were signed in the following sectors: agriculture, infrastructure, aircraft manufacturing, digitalization and information technology.

Saparbek Tuyakbaev, Chairman of the Board of NC Kazakh Invest JSC, signed a memorandum of cooperation with Honeywell company, a letter of intent to cooperate in the implementation of the Sierra Nevada Corporation project, a memorandum on the implementation of the project on the creation of a National Hydrometerological System in Kazakhstan as the PPP together with the Baron Services company. As part of the signed documents, NC Kazakh Invest JSC will assist in the creation of interdepartmental working groups for the further successful implementation of projects.

Among the signatories on the American side are representatives of large American companies and TNCs: Valmont, MasterCard, Honeywell and Sierra Nevada Corporation. The signatories from the Kazakh side were the heads of the AIFC, National Company “Kazakh Invest”, National Managing Holding “KazAgro”, Kazakhstan Engineering JSC, the akimat of Astana city.

To date, the gross inflow of direct investment from the United States to Kazakhstan amounted to $41 billion. As of September 1, 2018, more than 700 legal entities, branches and representative offices with US participation were registered in Kazakhstan.