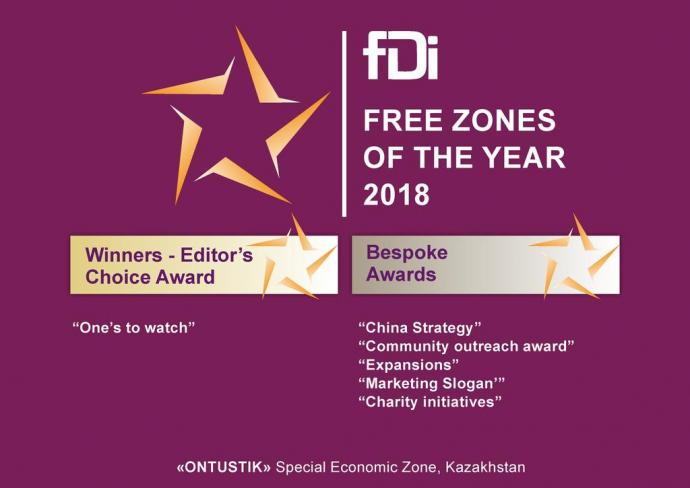 Ontustik special economic zone has been noted in the Global Free Zones of the Year for 2018 annual global ranking according to the international magazine fDi Magazine. The fDi Magazine is published by fDi Intelligence analytical center and been a part of the Financial Times publishing group. The magazine specializes in analyzing trends of the global direct foreign investment market. The international ranking of economic zones annually evaluates any types of investment projects around the world: special economic zones, export processing zones, free ports, etc. Experts evaluate the work of about 50 zones from around the world in different nominations every year. Ranking participants are determined based on a number of indicators, such as the number of residents, global coverage, available infrastructure, etc.

In evaluation of the special economic zones, the ranking compilers noted significant achievements of Ontustik SEZ in attracting investments from China in the amount of 140 million dollars. The authoritative publication fDi Intelligence declared Ontustik special economic zone as the winner in five categories: China strategy, Expansions, Marketing Slogan, Charity Initiatives and Community Outreach Award. The victory in these nominations was awarded for effective cooperation with resident companies, productive work with investors, significant expansion of production, marketing activities and participation in key industry exhibitions and conferences and organization of charity events.

The fact that Ontustik special economic zone received the Editor’s choice Ones to Watch - Great Perspectives special award from Ms. Courtney Fingar, fDi Magazine editor, is significant. As fDi Magazine noted: Ontustik special economic zone located in Shymkent was awarded the editor’s award as a promising special economic zone. Close location to raw materials and a favorable location along the road corridor allows to transport raw materials and finished products to developing markets. Investors implementing projects on the territory of Ontustik SEZ receive a number of preferences: free land for temporary use until 2030, tax and customs privileges, as well as support from local governments. The achievements in the framework of international activities was the opening of a representative office in China, as well as participation in a road show in Turkey, Dubai and South Korea.

The inclusion of Ontustik SEZ in the international free zones ranking means that Ontustik SEZ has now become a competent actor in the global investment field. Diplomas of Foreign Direct Investment Intelligence are a sign of quality and trust for foreign investors and partners. Now, the results of the efforts of Ontustik SEZ gained international recognition.