President of the Republic of Kazakhstan N. Nazarbayev met with representatives of the European business community during his visit to the Kingdom of Belgium on October 18, 2018 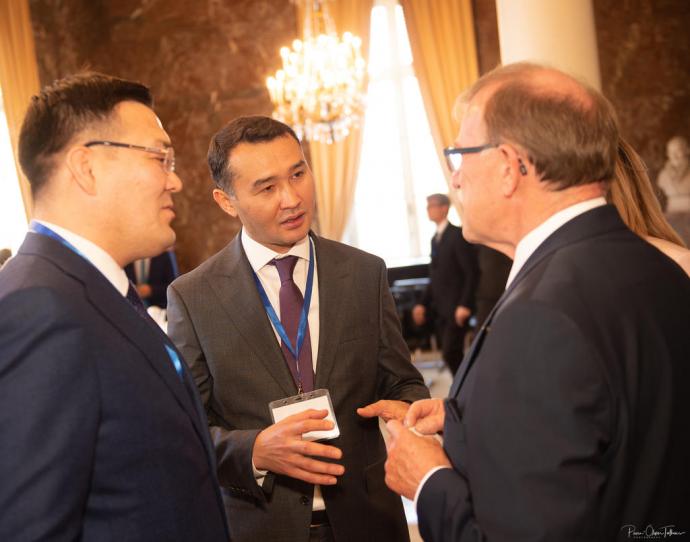 In the meeting with the President was attended by the heads of 25 leading European companies and transnational corporations, including Royal Dutch Shell, Alstom, Claas Group, Borealis, Linde Group and others.

Speaking to the participants of the meeting, the President noted that Kazakhstan takes steps to improve the business and investment environment. European businessmen, in turn, shared their positive experience of investing in Kazakhstan and urged the European business community to actively develop the Kazakhstan market.

To date, the participants of the meeting implemented 7 investment projects totaling more than $ 16 billion. Among the implemented cases are projects in the oil industry of Shell, production of electric locomotives and transformers of Alstom, Polpharma pharmaceutical plant in Shymkent. Another 6 projects aimed at the production of high-quality building materials, construction of a solar power plant, potato processing and others are under implementation. The total cost of these investment projects is more than $ 300 million. In the future, the launch of 12 more productions with the participation of European investors is considered.

During the visit, Saparbek Tuyakbayev the Chairman of the Board of Kazakh INVEST JSC held a number of meetings with European businessmen to discuss the implementation of current projects and prospects for further cooperation with potential investors.

During the conversation, representatives of Carmeuse Group Transnational Corporation told about the implementation of a major investment project for the construction of a plant for the production of lime of 1st grade at the Saryopan field in Karaganda oblast. Currently, the TEO and DED for the construction of the plant are being developed, the production technology is determined, the land plot and the subsoil use right are provided.

The Chairman discussed the prospects of further cooperation with the management of Van Hool, Belgian machine-building company. The company is interested in opening a joint venture for the production of buses in Kazakhstan. Representatives of Van Hool announced their readiness to transfer new technologies, create jobs and train local staff, open service centers, both existing in the country and new buses.

Discussing the prospects of joint work, the head of Toppies Holding Clemens Tonnies, the largest German food company, spoke about the plans for the implementation of a joint Kazakh-German investment project for the construction of a meat processing plant. The company will include a pig farm and poultry farm, feedlot, feed production. Today, the German side is selecting a potential Kazakh partner and region for the project.

At the end of the dialogue with the support of KAZAKH INVEST, a series of separate meetings of the Kazakh delegation with the heads of major European companies took place, during which the implemented projects and new initiatives were discussed in more detail. Specific agreements were reached between the Ministry of Energy of Kazakhstan, the European Bank for reconstruction and development, enshrined in the Memorandum on the construction of a solar power plant with a capacity of up to 28 MW in the South Kazakhstan region. The total cost of the project will be $ 35 million. Financing of the project is planned to be provided in tenge.

Astana Social and Entrepreneurial Corporation Astana JSC is a regional development institute, the sole shareholder of which is the mayor's Office of Astana. The idea of creating social and entrepreneurial corporations in Kazakhstan belongs to the President of the country. By analogy with the developed countries, companies have been created, bringing together a number of state assets, designed to develop business initiatives in the field. Astana SPK JSC NC was established in 2006 by the Decree of the President of the Republic of Kazakhstan.

World Trade Centers Association (WTCA) is an international non - political organization, one of the world's most famous brands to promote international trade and investment. WTCA is situated in the United States. Over the 40-year period of the existence of WTCA, more than 330 facilities were built in more than 90 countries of the world and more than 15,000 jobs were created. Objects are landmarks in major cities of the world, such as New York, Amsterdam, Tokyo, Seoul, etc.

Van Hool is a Belgian engineering company engaged in the manufacture of vehicles, including buses, trolleybuses, semi-trailers and tank trucks. The company produces about 1,400 buses a year, 80% of which are exported, including to the markets of Europe and America. The number of employees is 4.5 thousand people. Annual revenue is about 600 million euros. The company also has a bus factory in Macedonia and today invests about $ 50 million in the construction of a new plant in the USA (Tennessee).

Tonnies Holding specializes in the food industry and today owns the largest slaughterhouse of pigs and cattle in Germany, and also processes meat products. The company produces fresh and frozen meat products, which are supplied to supermarkets, for retail, wholesale and other customers. Tonnies Holding owns 9 facilities located in Germany, Denmark, France, Poland and the UK. Revenue at the end of 2017 - 6.3 billion euros.