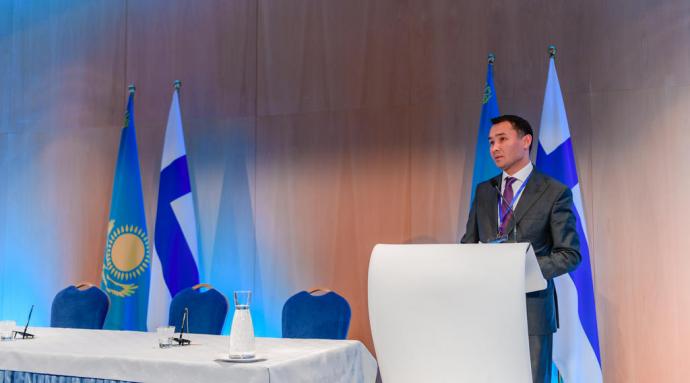 Nursultan Nazarbayev, the President of the Republic of Kazakhstan, met with representatives of such large companies and TNCs of Finland as Nokia, Wartsila, Vaisala, Metso, Koja, Nurminen Logistics. Following the visit, more than 20 commercial and non-commercial documents were signed for a total amount of $ 545 million.

During the meeting, Finnish businessmen spoke about their current activities in Kazakhstan, as well as plans and prospects for the development of bilateral cooperation. The President, in turn, stressed that the Republic of Finland is one of the most important trade and economic partners of Kazakhstan in Northern Europe.

The dialogue participants noted a high potential for increasing cooperation and entry of Finnish companies into the Kazakhstan market, which implies localization of production, opening of joint ventures and investments.

During the visit, KAZAKH INVEST NC JSC organized a Kazakh-Finnish business reception, during which businessmen of the two countries had the opportunity to establish direct contacts and reach specific agreements. Thus, within the reception, 23 bilateral commercial and non-commercial documents were signed for a total amount of $ 545 million.

A framework agreement was concluded between the management of the Northern Investment Bank and the Government of the Republic of Kazakhstan, which will be used to finance projects in Kazakhstan based on the principle of public-private partnership, capital investment (investments, corporate and sovereign loans, bank guarantees) and the creation of conditions for technology transfer.

Saparbek Tuyakbayev, the Chairman of the Board of Kazakh Invest NC JSC, signed a memorandum of understanding between KAZAKH INVEST NC JSC and Koja Company on the implementation of a project for the production of engineering equipment. A memorandum of understanding and cooperation was also signed between KAZAKH INVEST NC JSC and the Confederation of Finnish Industrialists, which includes a number of Finnish companies (Kone Corporation, Wartsila, Stora Enso, Kesko, Nokia Corporation). During the dialogue, the Confederation expressed interest in implementing projects in the Republic of Kazakhstan.

As part of the implementation of the memorandum signed between the Ministry of Energy of the Republic of Kazakhstan and the head of Wartsila company, the parties intend to consider the possibility of building a 50 MW combined-cycle power plant in the city of Turkestan, South Kazakhstan region. Among the projects implemented by the company in the Republic of Kazakhstan there are the power plant launched in 2015 for the Aktyubinsk rail and beam factory, as well as the power station for KazAzot plant in Mangystau oblast.

Koja company develops energy-efficient solutions for the creation of ventilation systems with a minimum load on the environment. Today, more than 20,000 Koja fans are used in the world for various industrial purposes. Koja company’s equipment is used in the energy sector, the pulp and paper industry, the petrochemical complex, the metallurgical and mining industries.

Nurminen Logistics is a Finnish company that provides high-quality logistics services, including rail transportation services, project cargo transportation, as well as forwarding and cargo handling. The company's network of divisions covers the hubs of Finland and Russia, which are important for logistics along the transit container route. Kazakhstan is included in the company's key markets zone. The net amount of the company's services in the first half of 2018 was 40.6 million euros. The turnover in 2017 amounted to 75 million euros.

The Nordic Investment Bank is the largest financial institution in the Scandinavian and Baltic countries. The bank is headquartered in Helsinki, and was founded in 1975. The Bank finances projects of interest to member countries both in Northern Europe (investments in infrastructure, the environment, education) and beyond its borders (assistance to partner firms of companies from Nordic countries). The Bank has the right to guarantee and allocate long-term financial resources in excess of its share capital up to 250%. The authorized capital of the bank is 6.1 billion euros.