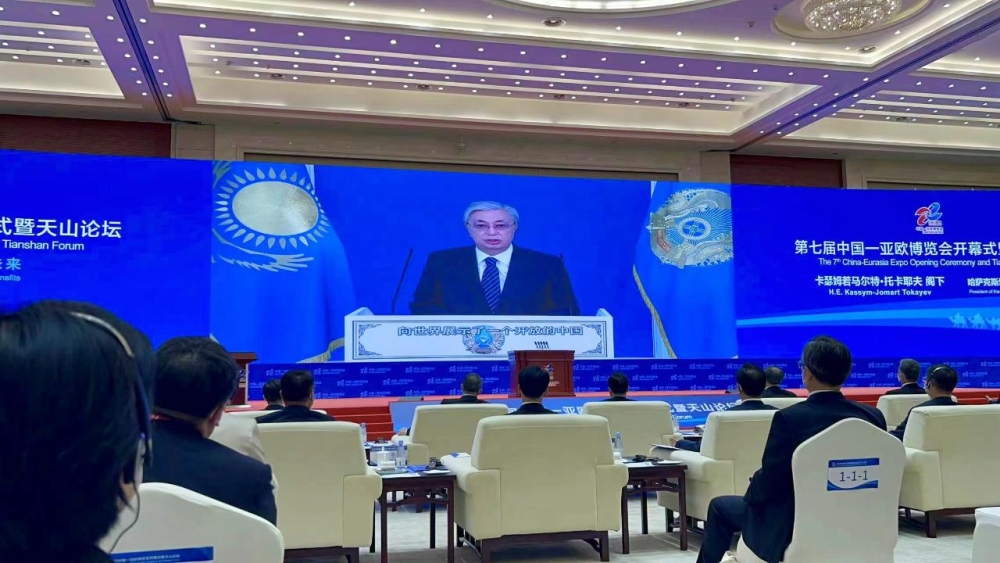 On September 20 of this year in Urumqi (Xinjiang Uygur Autonomous Region, China) within the framework of the largest in western part of China trade and economic exhibition of the VII EXPO "China-Eurasia", "KAZAKH INVEST" with the Embassy of the Republic of Kazakhstan in China have organized the Forum of Entrepreneurs Kazakhstan-China (Xinjiang).

On the Chinese side, the Bilateral Forum was organized by the People's Government of the Xinjiang Uygur Autonomous Region (XUAR) of the PRC and the China Council for Promotion of International Trade (CCPIT) of the XUAR.

The event opened by the first head of the region, Secretary of the XUAR Party Committee of China Ma Xingrui, who expressed XUAR's interest in actively establishing mutually beneficial investment, trade and economic cooperation between the enterprises of the region and the Republic of Kazakhstan.

From the Kazakh side, the Forum was attended by The Chairman of the Presidium of NCE Atameken Raiymbek Batalov, General Director of "QazTrade" JSC Azamat Askaruly, Counselor of the Embassy of the Republic of Kazakhstan in China Sultan Kinzhakulov, Managing Director for Development and Privatization of Samruk-Kazyna JSC Yernar Zhanadil, and Saken Abilmazhinov, General Director of Samruk-Kazyna Invest LLP.

Kazakh speakers presented business opportunities and prospects for cooperation between enterprises of the Republic of Kazakhstan and XUAR. They spoke about mutual participation in trade and economic exhibitions and events, development of mutual trade, export potential of Kazakh finished products, current cooperation between state-owned companies of the two countries, as well as prospects for participation in investment projects with the participation of national companies of the Republic of Kazakhstan.

Chairman of the Board of “NC “KAZAKH INVEST” JSC Meirzhan Yussupov in his speech emphasized that Kazakhstan and China maintain not only a comprehensive strategic partnership, but also develop good neighborly relations. He added that Chinese companies are one of the main partners for Kazakhstan in the implementation of large investment projects and take an active part in the industrialization of the republic. The head of the national company also called on the Chinese partners to take an active part in investing in the economy of Kazakhstan to develop progressive and mutually beneficial cooperation.

Kuanysh Amantay, General Representative of KAZAKH INVEST in China presented the investment opportunities of Kazakhstan, spoke in detail about the measures of state support for foreign investors in the republic.

From the Chinese side the Ambassador of the People's Republic of China to the Republic of Kazakhstan Zhang Xiao, the Chairman of the Board of the Xinjiang Sanbao Industrial Group Kang Heping, the General Director of the CA Goldwind Technology Center Sun Lianhua, the First Deputy General Director of the Yema Group Chen Gang, the General Representative of the EBRD in China Li Xinxing and other guests spoke at the forum.

The speakers spoke about the current trade and economic cooperation between the parties, the economic advantages of XUAR, promising areas for expanding cooperation and expressed interest in implementing projects in the fields of transport and logistics, agro-industrial complex, energy, e-commerce, science, chemistry and engineering.

In total, more than 200 representatives of Kazakh and Chinese enterprises, business and trade and economic structures of the two countries took part in the Forum. More than 15 million people watched the online broadcast of the event.

Within the framework of the Forum, enterprises of the two countries signed 11 commercial documents for a total of $475 million, including projects such as the production of zirconium concentrate, the construction of a smart greenhouse and the production of gas blocks. Thus, “NC “KAZAKH INVEST”  JSC signed a Memorandum on the development of mutual cooperation with the “China Council for Promotion of International Trade” of the XUAR of the PRC.

More than 3 thousand enterprises from 32 countries of the Eurasian region take part in the EXPO. Kazakhstan is presented in the status of "country - the main guest".