KAZAKH INVEST: The volume of Italian investments in the economy of Kazakhstan is 6.6 billion US dollars 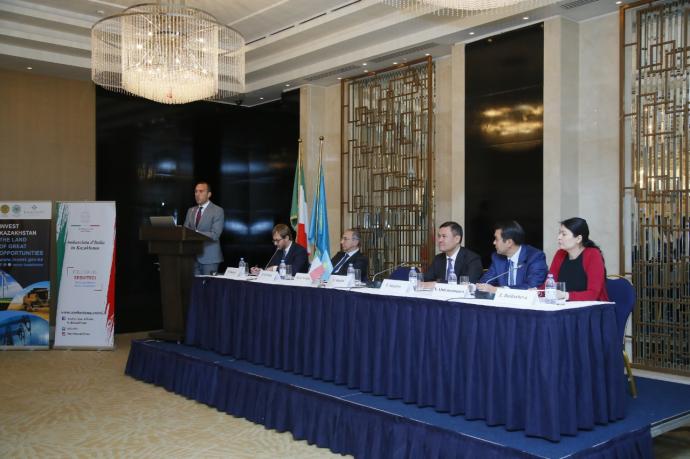 The First Kazakh-Italian business forum was held in Nur Sultan. The event, organized as part of the working visit of the Deputy Minister of Foreign Affairs of the Italian Republic Manlio Di Stefano to Kazakhstan, was attended by over 200 representatives of business circles, national companies, government bodies of the two countries.

During the forum, prospects for the development of projects in the field of energy, renewable energy, the petrochemical, manufacturing and agricultural sectors were discussed. Italian businessmen operating in Kazakhstan shared their impressions of activities in our country and recommended that the representatives of the Italian business community study objectively the business opportunities in the Republic of Kazakhstan, as the conditions for investors were found to be comfortable.

In his speech, Italian Deputy Foreign Minister Manlio Di Stefano noted that over the years of Independence and the transition to a market economy, Kazakhstan has managed to achieve significant successes, ensuring stable economic development and a favorable investment climate, and a high level of successful and effective relations between Kazakhstan and Italy has been achieved.

"I am sure that today's business forum will give impetus to the development of economies and business ties between the two countries. We have huge opportunities to expand trade, economic and investment cooperation, " said Mr. Manlio Di Stefano.

In his turn, Ambassador-at-large of the Ministry of Foreign Affairs of Kazakhstan Yerlan Khairov underlined that Kazakhstan and Italy have great potential for increasing investment cooperation, urging businessmen of the two countries to actively establish business contacts and implement investment projects.

“Between our countries there is considerable potential for expanding and deepening bilateral partnerships in the economic sphere, especially in the three priority sectors, such as alternative energy, agriculture and digitalization. In our country, the national company KAZAKH INVEST operates, which works on the principle of "one window" for current and potential foreign investors, providing support for investment projects from the idea to its implementation. In general, I express my readiness to provide comprehensive support to both foreign and national investors, ”said the speaker

During the forum, issues of cooperation in the implementation of engineering projects and food products were discussed. In addition, the Kazakh side not only presented its capabilities on the sidelines of the forum, but also held a number of working meetings with Italian partners in B2B format.

For example, representatives of Pavlodar Social-Entrepreneurship Corporation JSC held talks with the management of Naba Carni companies on the implementation of a joint project for the processing of horse meat in the territory of the Pavlodar region. Also, an agreement was reached between the delegation of the Pavlodar SEC and the Rota Guido company to consider an investment project in the development of the agro-industrial complex.

During the forum, the parties noted that the agreements reached and the decisions given gave impetus to enhance bilateral economic cooperation, as well as outlined new opportunities and prospects for partnership between business circles of both states.

The first Kazakh-Italian business forum was organized by the Embassy of the Italian Republic in the Republic of Kazakhstan, JSC " NC "KAZAKH INVEST", JSC " SWF "Samruk-Kazyna" and the company "ITA italian trade agency".

It will be remembered that Italy is the largest trading partner of Kazakhstan among the countries of the European Union and one of the leading investors in the economy of our country.

By today, the volume of Italian investments in the Kazakh economy is 6.6 billion US dollars.

The foreign trade turnover of Kazakhstan with Italy for 8 months of 2019 amounted to 6.7 billion US dollars. Totally, in Kazakhstan work about 270 companies with the participation of Italian capital.

It should be noted that the forum was held in the spirit of mutual understanding and trust, the parties noted that the agreements reached and the decisions taken gave impetus to the activation of bilateral economic cooperation, as well as outlined new opportunities and prospects for partnership between the business circles of both States.

The main commodity groups imported from Italy are consumer goods, and machinery and equipment predominate.