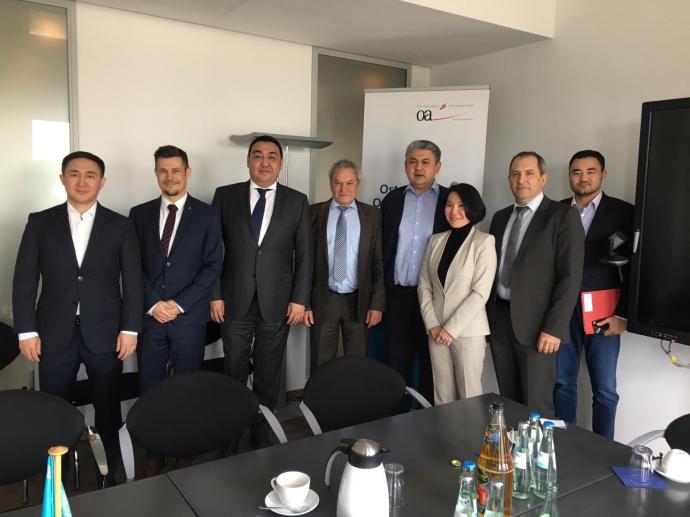 The two sides expressed a strong interest in strengthening trade, economic and investment cooperation. The parties came to an agreement to develop and sign a Road Map at a high level to systematise cooperation between Kazakhstan and Germany. The document would be aimed at implementing targeted projects in sectors, such as machine building, chemicals, light industry, mining, steelwork, energy, agriculture, transport, green economy, housing and public utilities, tourism, healthcare, vocational training and higher education, as well as economic digitalisation and IT. The Road Map will act as a starting point for a new stage of bilateral cooperation aimed at modernising Kazakhstan economy, attracting advanced technologies from Germany, and manufacturing highly-processed goods in the Central Asian country.

During the meeting of the IWG, the delegations discussed various thematic aspects of bilateral trade and economic cooperation between Kazakhstan and Germany, namely energy efficiency, environment, agriculture, industry, transport and logistics, housing and public utilities, health, education and dual education, tourism, financial cooperation and interaction in the field of intellectual property protection. Thus, in 2018, four investment projects with participation of German capital amounting to over $ 183 million were implemented in Kazakhstan. The projects were implemented in the fields of trade, industry and renewable energy and created about 400 new jobs.

The co-chairs of the IWG briefed meeting participants on the current economic situation in their countries in the context of the latest political developments, the state of the world economy, and challenges posed by trade wars. In spite of turbulence in the world markets and the protracted sanctions policy of a number of leading global players, the parties noted a sizeable increase in trade turnover between Kazakhstan and Germany in 2018. It was also noted that over 90% of German investments in Kazakhstan economy fall under the “non-resources sector”, particularly in the processing industry, chemicals, construction and agriculture.

The co-chair of the Kazakh IWG segment noted that Germany is one of Kazakhstan's key political and trade and economic partners in the EU, as well as a long-term priority country for Kazakh exports. Mr Kosherbayev informed German partners about the priorities of the state policy on attracting investments, aimed at creating favourable investment climate, improving investment infrastructure and ensuring interaction with foreign investors. In this context, he proposed exerting maximum efforts for large-scale implementation of joint investment projects and expansion of German companies’ production activities in Kazakhstan.

“Today, comprehensive investment attraction ecosystem is being modernised. Our investment climate is aligned with OECD standards. Active work is underway to create a direct chain of interaction - from embassies to local executive bodies. We are ready to make every effort, so that our joint investment projects as well as potential proposals for localising production in Kazakhstan, will be crowned with success", - said Mr. Kosherbayev.

In turn, Kazakh Invest, acting as a single negotiator on behalf of the Government of the Republic of Kazakhstan, informed investors about investment incentives and measures of state supportas well as presented to German investors “niche projects” packaged by the company.

“Our pipeline includes 174 foreign investment projects amounting to $ 40.1 billion. Mostly, these projects are in the industries, such as agriculture, mining and metallurgy, O&G, engineering, infrastructure and trade. Kazakh Invest, having representatives abroad and in all the regions of Kazakhstan, provides a full range of services to support investment projects from idea to implementation and during the post-investment period based on the single window principle,” - said the Deputy CEO, Rustam Issatayev.

The head of German delegation stressed the role that Kazakhstan plays as Berlin's most important regional partner. He praised the dynamic development of trade, economic and investment cooperation between the two countries, and also noted the interest of German business in the Kazakh market. In addition, he underscored the recent removal of a number of barriers from the bilateral relations agenda, which has opened up new economic and investment opportunities for increasing large-scale cooperation between the two countries.

“Our relations are marked by a huge and not yet fully-realised potential, as well as untapped niches that we can explore with specific proposals. For us, Kazakhstan is the most important key partner in Central Asia. German economy is interested in large-scale involvement in the modernisation of Kazakh economy and is ready to make its own contribution in this direction", -- Mr. Franz emphasised.

Notably, in 2019, the parties plan to implement a joint project with Tönnies, German meat processing and food production company with an annual turnover of EUR 6.3 billion. The company intends to develop a complete technological chain for meat processing, which includes a feedlot, a meat processing plant and distribution centres. There are also projects for construction of renewable energy plants planned to be implemented jointly with Sun Farming and Prisma Solar. During bilateral meetings, German company FB Waste Recycling discussed the possibility to establish a joint venture with Kazakh company Ekozher for waste recycling project in Zhambyl region. The project with a total value of 50 million euros would include solid waste processing (150 thousand tonnes per year) and power generation (up to 5 MW / h). The project would create about 80 new jobs in the region.

As part of its visit to Berlin, Kazakh delegation held a meeting with the management of CLAAS, one of the world's leading manufacturers of agricultural equipment. At the conclusion of the talks, German side agreed to set up agricultural machinery production in Kazakhstan as well as to develop a plan for the implementation of a joint project. An important achievement reached during the meeting was the agreement that "CLAAS" would select Kazakh enterprises for 30% localised production of output after five years in the market.

Additionally, Kazakh delegation had discussions with the deputies of the German Bundestag, the Heads of the German Committee on Eastern European Economic Relations and the German Society for the Promotion of Economic Cooperation, and visited the Berlin-Adlershof Science and Technology Park, which hosted over 500 companies and research institutes in the fields of photonics and optics, renewable energy and biotechnology.

During the meetings in Berlin, Kazakh and German sides reaffirmed their readiness to further strengthen and deepen the bilateral political, economic and investment cooperation. The results of the IWG meeting demonstrated that Kazakhstan and Germany have entered into a qualitatively new stage of economic cooperation. In this respect, the two sides expressed a readiness to begin implementing specific economic projects that would be reflected in the Road Map in the coming years.

The IWG is the main body coordinating trade and economic cooperation between Kazakhstan and Germany through regular dialogue at the intergovernmental level.