18 documents worth $ 1.5 billion signed at the Kazakh-Turkish Business Forum 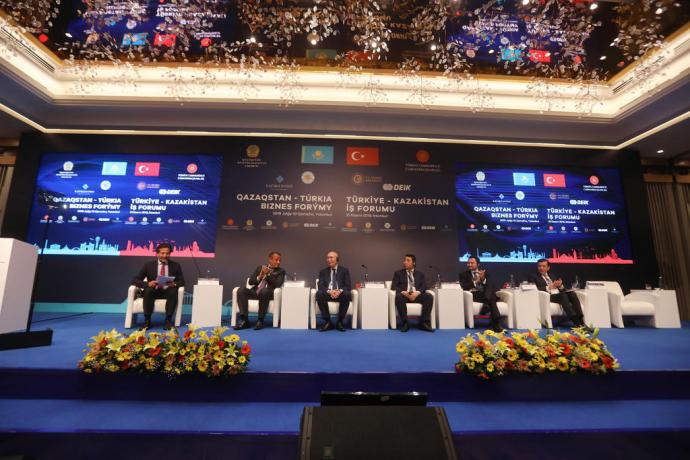 This event was held as part of a working visit of the Head of the Government of Kazakhstan to the Republic of Turkey.

Today, Turkey ranks second in terms of the number of operating foreign companies in Kazakhstan - about 2,400 companies with the participation of Turkish capital operate in the country.

The forum was attended by over 100 Kazakhstani and 500 Turkish representatives of official circles and business interests of both countries.

In turn, Fuat Oktay emphasized that over the years of Independence and the transition to a market economy, Kazakhstan managed to achieve great successes, ensuring stable economic development and a favorable investment climate, and a high level of successful and effective relations between the Republic of Kazakhstan and the Republic of Turkey.

Additionally, 18 documents on cooperation in the field of agribusiness and mining and metallurgy, light and chemical industries, transport and infrastructure, machine building, healthcare, tourism and housing for a total amount of $1.5 billion were signed on the sidelines of the forum.

In addition, representatives of the Kazakh delegation not only presented their capabilities on the sidelines of the forum, but also held more than 200 working meetings and negotiations with potential partners on specially designated areas in the B2B and B2G format.

“Our company is a single negotiator on behalf of the Government of Kazakhstan in discussing the prospects and conditions for implementation of Investment Projects. Today, KAZAKH INVEST, jointly with Turkish businessmen, is developing 16 projects in priority sectors of the economy for more than 1.6 billion US dollars. We are ready to assist you for any further issues in 24/7 ”- said Baurzhan Sartbayev, the KAZAKH INVEST Chairman of the Board, as part of bilateral meetings with representatives of the Turkish side.

It is worth noting that the official events were held inspired by understanding and confidence. The parties noted that the agreements reached and the decisions taken will serve the benefit of the peoples of Kazakhstan and Turkey.