Kazakhstan's accession to the World Trade Organization opens up new opportunities for both Kazakhstani exporters and foreign investors, who are provided with a favorable investment climate and liberal regulation.

A key advantage of Kazakhstan - its favorable geographical location - predetermines its significant transport potential in the field of transit traffic. Air, rail and road routes pass through Kazakhstan from Europe to Asia, in particular to Western China and from there to Southeast Asia.

The wide opportunities provided by integration into international transport corridors are demonstrated by the geography of export of goods from Kazakhstan.

Given its membership in the Eurasian Economic Union , which provides free movement of goods, services, capital and labor , there is great potential for export to the EAEU partner countries.

Kazakhstan, as a part of the Eurasian Economic Union, is actively expanding the geography of trade: negotiations are underway to conclude agreements on a free trade zone with India, Singapore, Serbia, Israel, Egypt. Such agreements have already been concluded with China and Iran (interim agreement).

Export of goods from Kazakhstan (2018 data)

Aktau seaport is located on the eastern coast of the Caspian Sea at the intersection of several international transport corridors. Aktau Sea Port is a modern multi-purpose terminal through which dry cargo, crude oil and oil products are transported from east to west, from north to south and back in the direction of Iran, Turkey, Russia, Azerbaijan, Turkmenistan.

In 1999, the Aktau seaport underwent a complete reconstruction, which was a turning point in the history of its development.

The port has all the necessary automobile and railway access roads, which allowed to reduce the processing speed of ferry cargo from 10-12 hours on average to 4 hours.

Despite the fact that Kazakhstan is landlocked, the geo-economic potential of its location in the center of the Eurasian continent is actively used. In 2014, the Kazakh-Chinese terminal began operating in the coastal port of Lianyungang in eastern China. The favorable location of the port, well-established railway and sea communications with major Chinese cities and ports contribute to the integration of Kazakhstan into international supply chains.

The main objective of the terminal is to concentrate cargo from the countries of Southeast Asia in the direction of Central Asia, Russia and Europe. By 2020, the terminal is expected to handle more than 550 thousand 20-ton containers per year. 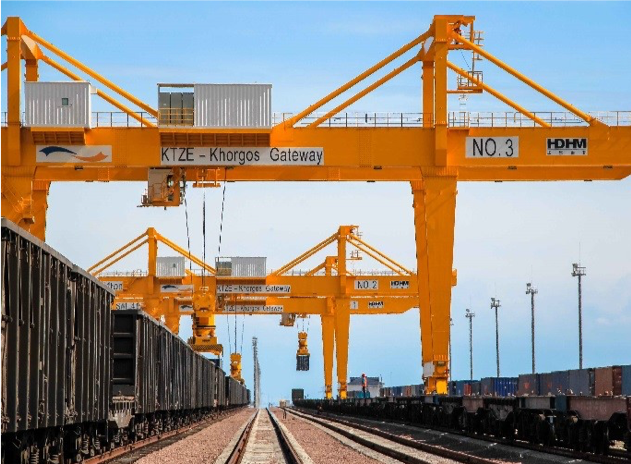 The Khorgos International Center for Cross-Border Cooperation is a trading hub, one of the largest projects implemented on the initiative of the heads of state of Kazakhstan and China. The project aims to facilitate trade with China and develop the transport potential of both countries.

Khorgos ICBC is one of the key projects not only for the transport and logistics system of Kazakhstan, but also for the entire transcontinental corridor Western Europe - Western China.

Khorgos ICBC is one of the components of the special economic zone "Khorgos - East Gate", which also includes a large transport and logistics complex ("dry port"), industrial and residential areas.

The Batumi oil terminal is located on the Black Sea coast in the city of Batumi (Georgia) and provides its clients with services for the transshipment of oil and oil products from Kazakhstan, Azerbaijan, Turkmenistan, Georgia and other countries. The owner is KazTransOil JSC, a subsidiary of NC KazMunayGas JSC.