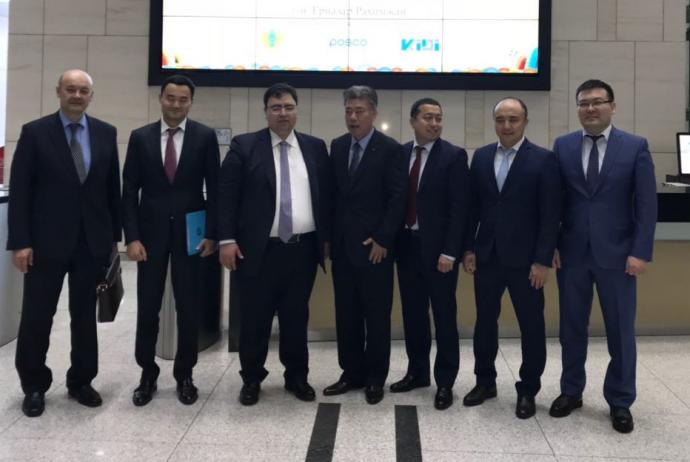 Negotiations are held between the Kazakhstani delegation headed by the Vice-Minister for Investments and Development of the Republic of Kazakhstan Arystan Kabikenov and the largest South Korean companies on the activation of economic cooperation in Seoul.

There are the Deputy Akim of Kostanay oblast Meirzhan Myrzaliyev, the Head of Kazakhstan Center for Public-Private Partnerships JSC Azamat Oynarov, the Deputy Chairman of the Board of the national company Kazakh Invest Rustam Issatayev, representatives of the National Welfare Fund Samruk-Kazyna, KTZh-Express NC JSC, KazAgro JSC and others in the delegation.

Today, members of the delegation of Kazakhstan discussed cooperation with the Deputy Chairman of the Association of Energy and Mineral Resources of Korea Sang Woon Han.

“Recently, we have been very actively cooperating with the Embassy of Kazakhstan and KazGeology JSC. We hope that as a result of this work our companies will find interesting projects in the mining sector of Kazakhstan”, -Sang Woon Han stressed.

During the visit to Korea, the dialogue was also held on the exchange of experience in the management and legislative regulation of special economic sectors, the opportunities of the East Cost FEZ were presented, which since 2013 has been operating in the mining and metallurgical sector, in the fields of logistics and green economy and other promising areas.

In addition, on the first day of the investment week, meetings were held with the management of the largest Korean TNCs: Noroo Kiban, Highvill and POSCO ICT.

Thus, issues of investing in the number of construction projects in the regions of Kazakhstan were discussed at the meeting with the Chairman of the Board of Highvill.

“For 14 years we have been doing business in Kazakhstan and would like to take this opportunity to express our gratitude for such support. I think that we successfully implemented our construction business. Our company intends to continue this activity in the future. Our experience in Kazakhstan is really a good example for the activities of other Korean companies in Kazakhstan”, - Koh Jae-il said.

In turn, the company Noroo Kiban is interested in investing in projects of the agricultural sector, the chemical industry using the latest information and communication technologies. So, at the meeting the Deputy Akim Kostanay oblast Meirzhan Myrzaliyev suggested to consider the possibility of investing in regional projects.

At the meeting with the first Vice-President of POSCO ICT, Lee Chan Bok discussed the possibilities of investing in IT infrastructure, automation, Smart City.

“Just 20 hours ago we met with the Ambassador of Korea in Kazakhstan, and he expressed surprise that cooperation with South Korean IT companies, especially with such a company as POSCO, has not yet been properly strengthened. We are interested in cooperating with your company”, - said the Deputy Chairman of the Board Kazakh Invest Rustam Issatayev in the interview with the first Vice-President of POSCO ICT.

The number of meetings with South Korean companies and business forum are planned within the framework of the investment week in Seoul.