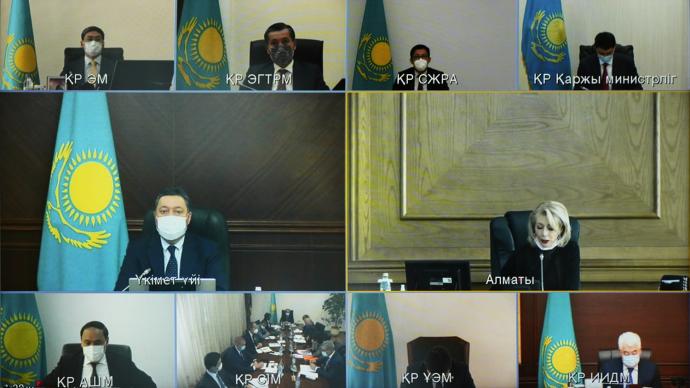 At the meeting of the Council on Improving Investment Climate chaired by the Prime Minister of Kazakhstan Askar Mamin, the development of renewable energy sources and the transition of Kazakhstan to a low-carbon economy were considered.

The issues of decarbonization of the economy and adaptation to climate change, the introduction of the best available technologies in the Republic of Kazakhstan, attracting investments in the development of renewable energy sources, precision farming and the green economy in general were discussed.

The Head of Government noted that Kazakhstan is stepping up measures to implement its obligations in the framework of the global fight against climate change. At the same time, efforts are focused on increasing the sustainability and decarbonization of the economy.

In order to achieve the implementation of the Paris Agreement by Kazakhstan by 2030, the Government targets a 15% reduction in greenhouse gas emissions. To achieve this goal, Kazakhstan updated its Nationally Determined Contribution to Reducing Emissions (NDCs) and developed a corresponding Roadmap for 2022-2025.

The Prime Minister noted that the Government intends to double the share of renewable energy sources in total energy production to 6% already in 2023, and not in 2025, as previously planned.

The Head of Government stressed that Kazakhstan has taken a number of structural measures to improve the investment environment to attract foreign capital and advanced technologies to the development of alternative energy.

As a result, in 2020, 25 renewable energy projects with a total capacity of almost 600 MW were commissioned. The volume of investments exceeded $ 510 million.

Over the next four years, it is planned to commission more than 60 new renewable energy projects with a total capacity of 2,400 MW and an investment volume of more than $2.5 billion.