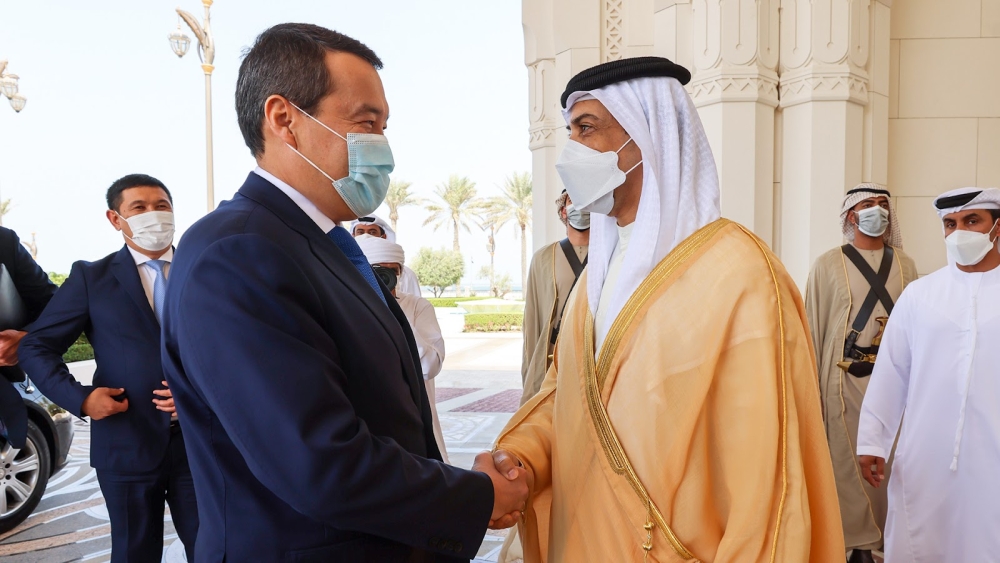 Alikhan Smailov said that Kazakhstan and the UAE have established a constructive political dialogue and reached an exemplary level of bilateral cooperation facilitated by regular contacts at the highest level.

"The United Arab Emirates is Kazakhstan's main trade and economic partner in the region. The Emirates retain the leading position among the Arab countries in terms of trade turnover with our country," the Prime Minister stressed.

So, following the results of 2021 mutual trade turnover amounted to $ 709 million with an increase by almost 50% compared to the previous year.

"This is an impressive result, but we can make joint efforts to further expand the nomenclature of mutual trade," Alikhan Smailov said.

He also noted that there has been a consistent increase in the inflow of investments from the UAE to Kazakhstan in recent years. According to the results of last year, this indicator grew by 43% and reached $250 million. The dynamic trend continues this year as well.

"We see significant potential for increasing and deepening investment cooperation in such sectors as the mining and metallurgical complex, agriculture, petrochemicals, energy and geology. These spheres correspond to our strategic priorities," Alikhan Smailov emphasized.

In this regard, a list of promising investment projects totaling more than $6.5 billion was submitted for consideration to Sheikh Mansour bin Zayed Al Nahyan. In this regard, Alikhan Smailov focused on five major projects in industry, energy, banking and agriculture, including creation of a joint venture fund, construction of a sugar plant and launch of production of soda ash.

"The Government of Kazakhstan is set to intensify and strengthen mutually beneficial cooperation with the UAE in all directions," Alikhan Smailov concluded.

A number of bilateral interdepartmental documents in the spheres of ecology, trade, culture and education were signed following the meeting.

In turn, Sheikh Mansour bin Zayed Al Nahyan stressed the special importance of the visit for strengthening and expanding cooperation between the countries.

He noted that Kazakhstan is one of the UAE's leading partners in Central Asia and expressed interest in implementing joint projects in banking and agriculture, including production of sugar and dairy products.

Sheikh Mansour bin Zayed Al Nahyan expressed the hope for the current visit of the Head of Government of Kazakhstan to promote relations between the countries to a higher level.