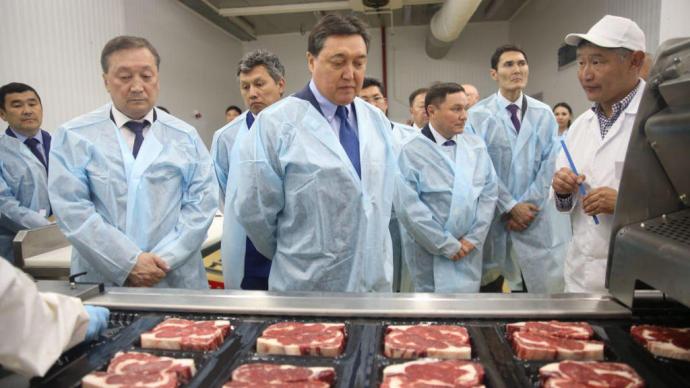 The Prime Minister Askar Mamin made a working trip to Akmola region, where he reviewed preparations for the upcoming XVII Forum of Interregional Cooperation between Kazakhstan and Russia scheduled in 2020 and visited a number of backbone enterprises in the fields of industrialisation, housing development and agriculture.

The CEO of Kazakh Invest Baurzhan Sartbayev also took part in the working trip. The Head of the National Company held a number of meetings with the management of investment projects in the field of agriculture.

Makinsk poultry farm saw the launch of the first phase with a capacity of 25 thousand tonnes of meat annually. The second phase will be commissioned in 2020 and will increase production capacity up to 50 thousand tonnes.

During the trip, the delegation visited a meat-processing complex for production of marbled beef, KazBeef Group. Askar Mamin inspected production plant where the latest technological solutions were introduced after reconstruction in 2019. The plant capacity is 120 heads of cattle per day or 10 thousand tonnes of meat per year.

The Prime Minister Askar Mamin noted the importance of ensuring a systematic approach to the development of the region’s economy and improving the quality of life of the population. He emphasized that every effort must be made to achieve the goals set by the First President – Elbasy Nursultan Nazarbayev in strategic documents, and fulfill the instructions given by the Head of State Kassym-Jomart Tokayev. In turn, the XVII Forum of Interregional Cooperation between Kazakhstan and Russia will give a serious impetus to the development of trade and economic relations between the two countries.