The Government of Kazakhstan offered business to invest in Kazakhstan 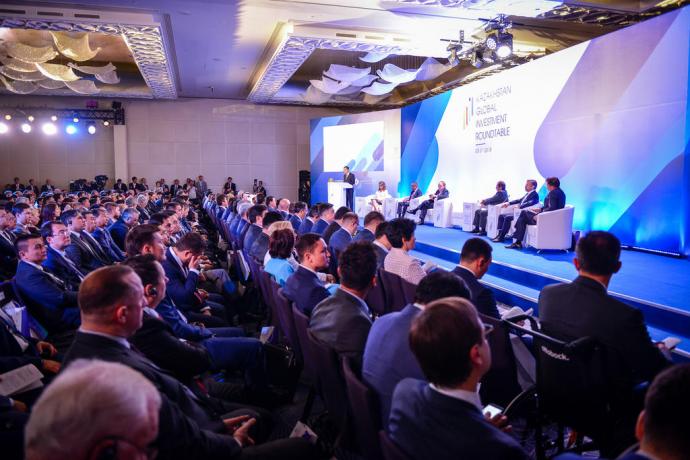 On July 3, 2018 Kazakhstan Global Investment Roundtable 2018 (KGIR-2018) was held in Astana under the chairmanship of Prime Minister of Kazakhstan Bakytzhan Sagintayev.

According to the Prime Minister, the growth of the economy of Kazakhstan in 2017 amounted to 4%. At the same time, the contribution of non-oil sectors has provided almost two-thirds of the growth, which means that the Kazakh economy is increasingly beginning to rely on non-oil sectors. In the international Doing business ranking, we are ranked 36th in six positions: there are improvements in six indicators – we are in the first place in the protection of minotar investors. The gross inflow of foreign direct investment for 2017 amounted to almost 21 billion dollars, a quarter of this volume is sent to the manufacturing industry – it is 5.2 billion dollars, which is 27% higher than in 2016. In total, about 50% of all foreign investments are directed to non-oil sectors. The positive dynamics also remains this year. In 5 months of 2018, agreements were reached on the implementation of 69 new projects with large investors, including 10 transnational companies fr om China, Turkey, the USA, the UAE, the UK and the EU. Totally, 54 projects worth 3.9 billion us dollars will be completed in 2018. Also, the construction of 63 projects worth 6.8 billion us dollars will be started.

“We invite other investors to take part in these projects. All this is the largest investment projects that confirm the favorable investment climate in the country and the high reputation of Kazakhstan as a reliable business partner. The government values this and intends to continue the policy of creating attractive conditions for foreign investors. We will strengthen the coherence of national legislation with international economic and trade rules, increase transparency, improve the protection of property rights, ensure the rule of law, encourage competition and lim it monopoly. Our basic reference point is the standards of the member countries of the organization for economic cooperation and development” – invited B. Sagintayev.

Investors recognized that the business climate in Kazakhstan is really very positive. Thus, according to Mikhail Lifshits, Chairman of the Board of Directors of “ROTEK” JSC, he has been working in the country since 2011, and has never faced difficulties.

Within the framework of KGIR-2018, heads of ministries and departments presented investment opportunities of Kazakhstan in the field of investment, economic development and competitiveness.

During the round tables on such topics as: “Kazakhstan: meeting new challenges” and 8 thematic sessions (“Creating new markets for a diversified economy”, “the logistics potential of the Eurasian region”, “improving the efficiency of the privatization program in Kazakhstan”, “the energy potential of Kazakhstan-investments in a new stage of development”, “Agro-Industry: ensuring food security on the new silk road”, “Astana international financial center-entry to the Eurasian financial markets”, “the Eurasian agenda of digitalization – development of industry infrastructure 4.0”, “Opportunities of metallurgy and mining” members of the government told what is being done in Kazakhstan and invited foreign investors to invest in Kazakhstan.

“Kashagan is expected to increase production and refining of oil. The Karachaganak development plan provides the existing level. The implementation period by 2020 is 1.5 billion dollars. Over 30 thousand Kazakhstani citizens work at the Tengiz field as part of the expansion project. And the volume of investments in this project exceeds 38 billion dollars. Development over the past two years has exceeded 11 billion, this year - more than 7 billion US dollars”- said Energy Minister Kanat Bozumbayev during a round table on energy potential.

“Kazakhstan is located in the heart of Eurasia, between Europe and China. Due to its location, a number of large infrastructure projects are being developed in Kazakhstan: the dry port of Khorgos on the border with China, the Aktau port on the Caspian Sea, the international transit corridor “Western Europe - Western China”. Moreover, Kazakhstan’s accession to the Eurasian Economic Union with a market capacity of about 180 million people opens additional opportunities for investors to effectively implement investment projects on the territory of the republic. Investors can freely promote their products to the markets of Russia, Belarus, Kyrgyzstan and Armenia” – said Deputy Prime Minister, Minister of Agriculture Umirzak Shukeyev, listing the investment opportunities of the agro-industrial complex.

“System changes will make a significant contribution to the development of the industry, creating the conditions for improving its efficiency. In general, we would like to simplify the procedures and make them liberal and transparent through this law. I think the bill is quite revolutionary in General in the post-Soviet space. We have heard some criticism of the bill from our closest partners. But the world practice shows that we must move in this direction. And I think we made the right choice. Time, of course, will show, but today we see great interest from investors to work on the new rules of the new law” – presented the benefits of the new code “on subsoil” Minister of investment and development Zhenis Kasymbek.
International experts, who gave their recommendations on how to make Kazakhstan even more attractive for investment within the framework of the round tables, did not remain in debt either.

“One of the most important things a government can do is to increase its investment in human capital. In the 1960s, Jamaica and Singapore had the same GDP. Jamaica chose to develop agriculture and so on, and they had a GDP of 5,000 dollars per capita. And Singapore has chosen the development of human capital, and today their GDP per capita is 53 thousand dollars. Of course, Jamaica and Singapore do not have such land resources as Kazakhstan, but I would advise to make Kazakhstan a country that would attract the best professionals from the whole region” - suggested the managing director of a large analytical center Milken Institute (Europe) James Morgon.

“Kazakhstan needs to focus on 3-4 priority sectors, and then launch a very proactive campaign to attract investors from Europe and North America, Canada and the United States, Japan, Korea, Russia and China and other countries. In order to help them integrate into the activities and development of new sectors of the economy. My research shows that they will play the most important role for the development of Kazakhstan” – said Teodor H. Moran, professor of international business and finance at Georgetown University, UN consultant, noting that among these areas there should also be a sector of locomotive production and agriculture.

Within the framework of Kazakhstan Global Investment Roundtable, there are 30 commercial documents were signed for a total amount of 4.8 billion us dollars, which are able to attract investments in high-tech projects and cover almost all sectors of the country’s economy:

- in the field of mechanical engineering: a roadmap for the implementation of a project for the production of cable products between the Akimat of the Karaganda region and the company Hebei Hua Tong Cable, etc.

- in the sphere of agro-industrial complex: memorandum on cooperation between the group of companies Eursian Agro Holding and Australian company Cedar Meats Australia on the implementation of the project of a meat processing plant. In addition, a memorandum of understanding between Kazakh Invest and the Turkish company Agro Best Group was signed within which a plant for the production of plant protection products will be opened. In the framework of another memorandum of understanding between Kazakh Invest and the Turkish company Dal Holding, a greenhouse complex of 200 hectares is planned to be built with the creation of a vegetable storehouse, a gas turbine power plant. Kazakh Invest also signed a memorandum with the Chinese company Hangzhou Qiandaohu xinLong Sci-tech for the breeding and processing of sturgeon fish in the amount of 12,000 tons of fish and 2,000 tons of caviar. Also between the Akimat of Almaty region and “Phoenix Global DMCC” a memorandum on the creation of a cluster on fruit processing was signed.

- in the field of oil and gas chemistry: an agreement was signed between Kazakh Invest and West Hydrocarbons Commercial Investment, within which a modern oil refinery will be built. Another signed agreement in this field was a memorandum of understanding between the Akimat of Atyrau Oblast and the Singapore Company WestGasOil for the implementation of the methanol and olefin production project in the Special Economic Zone “NINT”.

- in the field of logistics: an agreement on cooperation between the companies Semurg Invest and Fund Partnership Fund Invest on the implementation of the construction of a multifunctional sea terminal in Sarzha port in Kuryk.

- in the retail sphere: within the framework of the memorandum of cooperation between the national company Kazakh Invest and the French company Decathlon Kazakhstan a chain of shops will be established for the sale of sportswear and equipment, followed by the localization of production (300 million US dollars, 4,800 jobs).

- in the sphere of the mining and metallurgical complex: a memorandum of understanding between the Akimat of Zhambyl Oblast and the Turkish company Dal Holding on the construction and commissioning of a mining and processing plant for the production of barite concentrate with a capacity of 75,000 tons per year in the Zhambyl region.

In addition, an agreement was signed to implement eight projects with transnational companies from 13 countries, such as France, Germany, the United Arab Emirates, Turkey, Poland, Russia, China, etc.