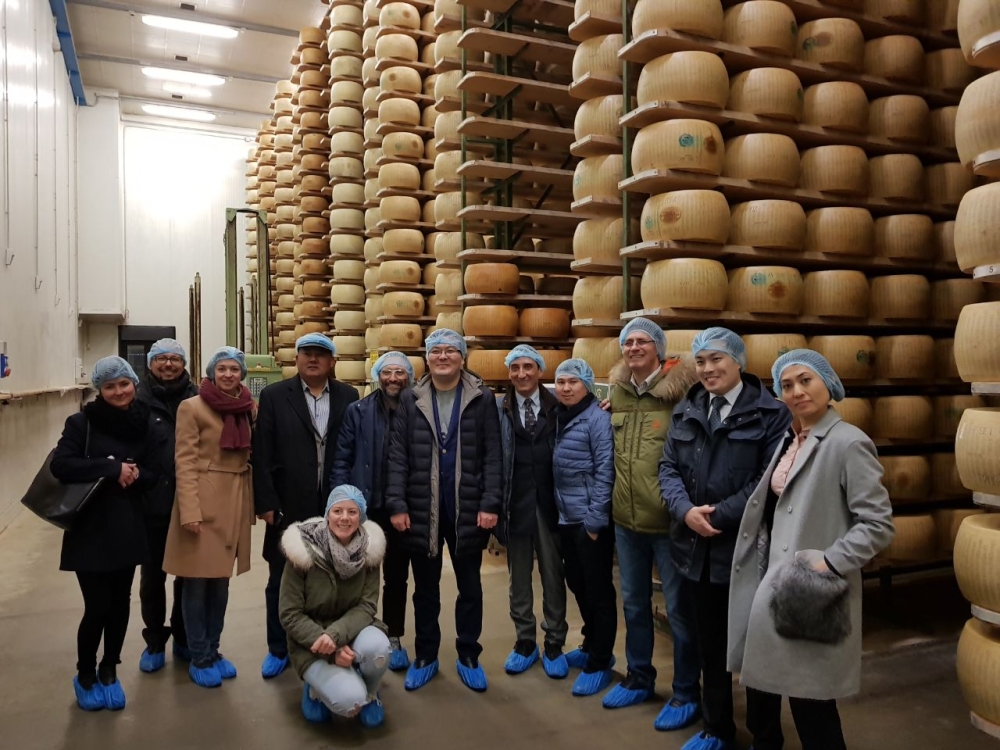 Last week in Rome (Italy), with the support of Kazakh Invest NC JSC, VIII meeting of the Intergovernmental Kazakh-Italian Working Group for Industrial and Economic Cooperation and Exchange (IWG) and a business forum took place.

The Kazakh delegation arrived to participate in the forum included the representatives of the agrarian sector — the Director of the Department for Cooperation with Investors at KazAgro NMH, Ruslan Turarov, Chief Manager at Kazakh Invest NC, Saule Sabyr, deputy akim of Kostanay region, Meirzhan Myrzaliyev, as well as entrepreneurs from Tobol SEC, Grand LLP, Bisenali LLP.

During the trip aimed at studying the experience of crops cultivation and discussing the ways to develop investment projects in the AIC, agricultural enterprises were visited.

The result of the talks was an agreement on cooperation to study the implementation of joint investment projects with the application of technologies for deep processing of agricultural products between Kazakh Invest, KazAgro, the akimat of Kostanay region and the Chamber of Commerce of Milan and Lombardy, which unites more than 9 thousand Italian enterprises.

At the end of the forum the participants commented on the results of the meetings.

"Within four days we visited a number of enterprises involved in the processing of agricultural products, but I would like to mention the PAVAN company, an enterprise with 60 years of experience. We want to create a joint venture for the production of pasta from durum wheat, which is very important for our region," deputy akim of the Kostanay region Meirzhan Myrzaliyev said.

According to the akimat's data, Kostanay region has about 6 million hectares of land and grows quality wheat varieties. In a year the harvest reaches about 183 thousand tons of durum wheat varieties with over 25% of gluten, but the whole volume is exported to neighboring countries as raw materials. Meanwhile, the region's leadership, in accordance with the instructions of the Head of State, aims to add value to these products and sell it as an end product.

The Head of Grand LLP, Andrey Yemelyanov spoke about the prospects of cooperation with Italian companies: "Kazakhstan is a fertile land and we learned how to grow wheat long ago, but unfortunately, there is no processing into end-use products with the use of our equipment. During our stay in Italy, we visited a number of factories, but I would like to mention the company FAVA for the production of equipment for food industry."

For reference: FAVA (founded in 1937) developed and patented the first machines capable of drying the product in a continuous process, creating the prerequisites for the introduction and subsequent promotion of automation in the pasta industry, which today provides 40% of the world market with equipment in this segment. For example, the following macaroni brands work on the equipment of this company: Andalini, Barilla, PastaZara, DeCecco, Melissa, Goody, Ronzoni, Zar Macaron, Baronia, Colussi.

Also during the trip the Kazakhstan delegation met with the management of the company Bonifiche Ferraresi. This meeting was organized by KazAgro within the framework of the signed memorandum between the two holdings.

For reference: Bonifiche Ferraresi is an Italian agricultural holding engaged in the cultivation and marketing of agricultural products (the holding has about 5,500 hectares). The company is engaged in the cultivation of rice, corn, hard and soft wheat, barley, sugar beet, alfalfa, sunflower, soybeans, garden plants and fruits, and livestock breeding. Within the framework of this meeting, all the main institutions of the holding were represented: Fruges SAS, IBF Servizi S.p.A, CNR-IREA, SIS, OCRIM, CHIGI, OCRIM, CDP, and also a livestock farm specializing in the development of Holstein meat and milk was visited.

In addition, Kazakh agrarians visited the Andalini pasta shops and met with its president, Massimo Andalini, who told about the family business, whose history began in 1956. In 60 years the company took and strengthened its place in the domestic market of pasta. According to the results of the meeting, taking into account the high interest from the Italian side, an agreement was reached on elaboration of the potential for launching the project on Construction of a Plant for the Production of Pasta from Durum Wheat.

Upon arrival, the Kazakh side will send concrete proposals on cooperation and the establishment of joint ventures. It should be noted that representatives of the Kazakh agricultural business took part in this forum for the first time.