Representatives of the two countries discussed the prospects of cooperation during the business forum, which was held today in Tashkent. 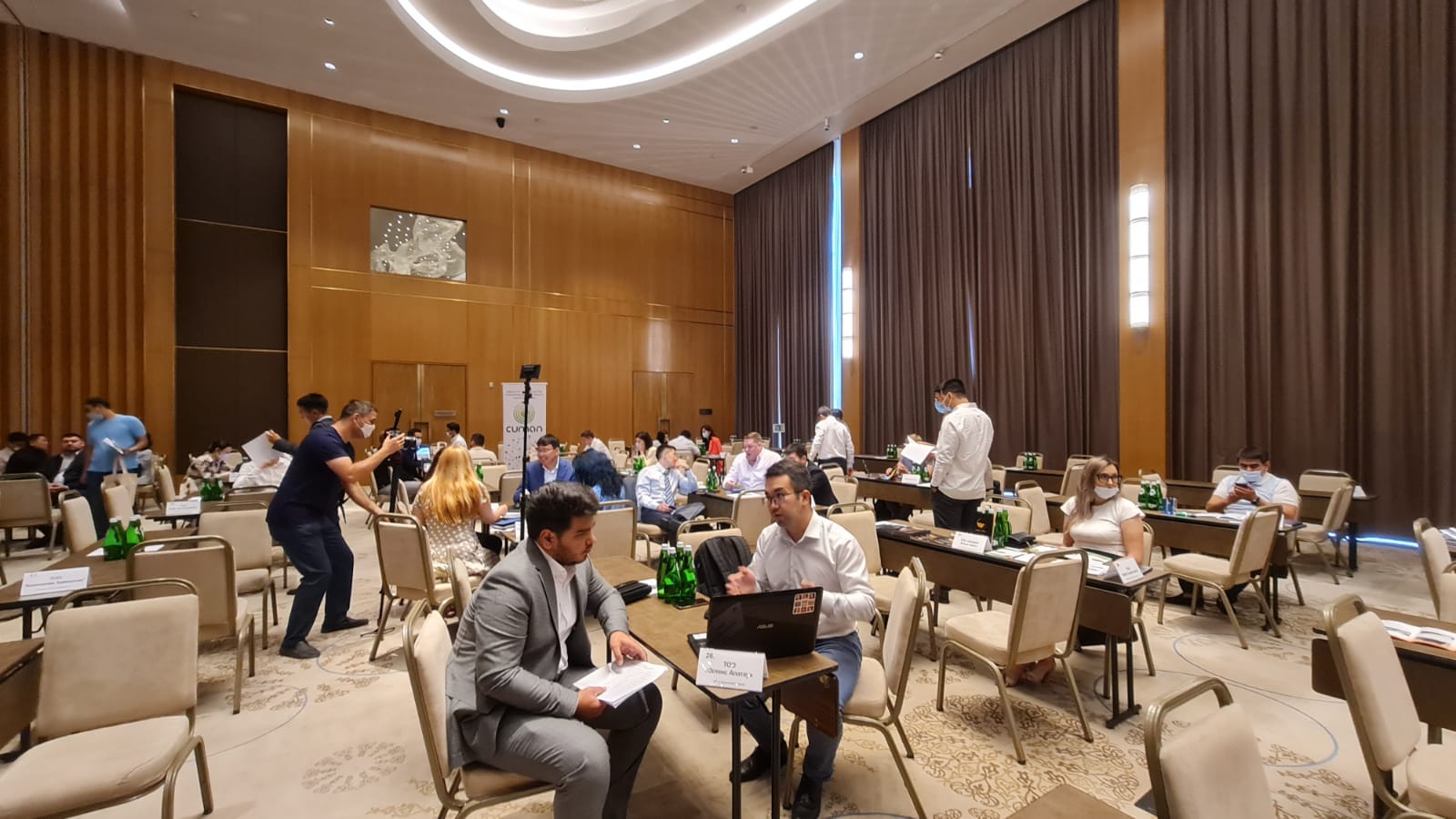 The event was organized by the Kazakh export support company QazTrade and the Export Promotion Agency of the Republic of Uzbekistan.

The Minister of Trade and Integration of the Republic of Kazakhstan Bakhyt Sultanov addressed the participants of the meeting with a welcoming speech.

The Minister noted that the practice of conducting trade and economic missions is "an effective mechanism for deepening cooperation between our countries." "Kazakhstan and Uzbekistan are the two largest economies of Central Asia, which harmoniously complement each other", - said Bakhyt Sultanov.

He also noted that the trade turnover between the two countries has grown significantly since the beginning of 2021. "For 5 months of 2021, it amounted to $ 1.5 billion. This is 46% higher than last year's volumes, and more importantly, almost 20% of the pre-crisis 2019 indicator", - said the Minister of Trade of the Republic of Kazakhstan.  At the same time, the presidents of the two countries set a task to increase mutual trade to $10 billion. in the coming years. Both the Governments of Kazakhstan and Uzbekistan are making every effort to simplify and facilitate trade between our countries.

Vice-Minister of Trade and Integration of the Republic of Kazakhstan Kairat Torebayev took part in the business forum.

He said that currently more than 50% of Uzbekistan's trade turnover (more than 10 billion US dollars) passes through the territory of Kazakhstan.

"According to the estimates of the Asian Development Bank, trade between our regions and transit trade along the existing corridors will increase by 35% in 2025 and by 65% in 2030 compared to the level of 2019", - said Torebayev. At the same time, the load on the existing checkpoints will almost double.

The Kazakh side voiced a proposal not to increase the load on border checkpoints and "not to transport a large number of goods across the border, but to create goods at the border".

- The border center "Central Asia" should become the largest magnet and generator of trade in the region, the development of financial services, consolidation, processing, distribution of cargo flows, as well as production and cooperation within the framework of the developing Central Asian Economic Corridor "North-South". We agreed to focus on the development of industrial cooperation and the implementation of joint investment projects at the ICTES (International Center for Trade and Economic Cooperation "Central Asia")", - said Torebayev.

The representative of the MTI of the Republic of Kazakhstan also said that Kazakhstan is currently reviewing the Concept of further development of the "Khorgos node", is working on the launch of border hubs with Russia with further access to the markets of the EAEU and the EU.

Kairat Torebayev also noted that such industrial and trade hubs should serve all the countries of Central Asia and provide reliable access to the promising markets of Afghanistan, Pakistan and India.

At the same time, it was noted that it is also necessary to focus on the joint "promotion to the south" for all countries of the region through the Uzbek-Afghan border trade center "Termez" and the construction of roads and railways in the southern direction.

The integration of national commodity distribution systems is designed to promote the joint development of third-country markets and, most importantly, to increase bilateral trade turnover.

- It is obvious that it is necessary to unite our ORCS into a single commodity distribution network, which will allow fruit and vegetable products to pass freely and without stopping at the borders to those settlements where they are guaranteed to be in stable demand, - noted Torebayev.

He also explained that the flow of goods within the framework of the commodity distribution system will not affect the workload of border trade checkpoints: "The cargo received in the ORC in one country will be checked according to uniform quality standards and undergo preliminary customs clearance. It will be delivered to the ORC in any other country without any customs procedures at the borders. Accordingly, it will not load our checkpoints", - said the Vice-Minister of Trade and Integration of the Republic of Kazakhstan.

During the business forum, Kuat Zholdybekov, Director of the Investment Attraction and Marketing Department of JSC NC KAZAKH INVEST, made a presentation on the main advantages of implementing investment projects in the Republic of Kazakhstan and the activities of KAZAKH INVEST. 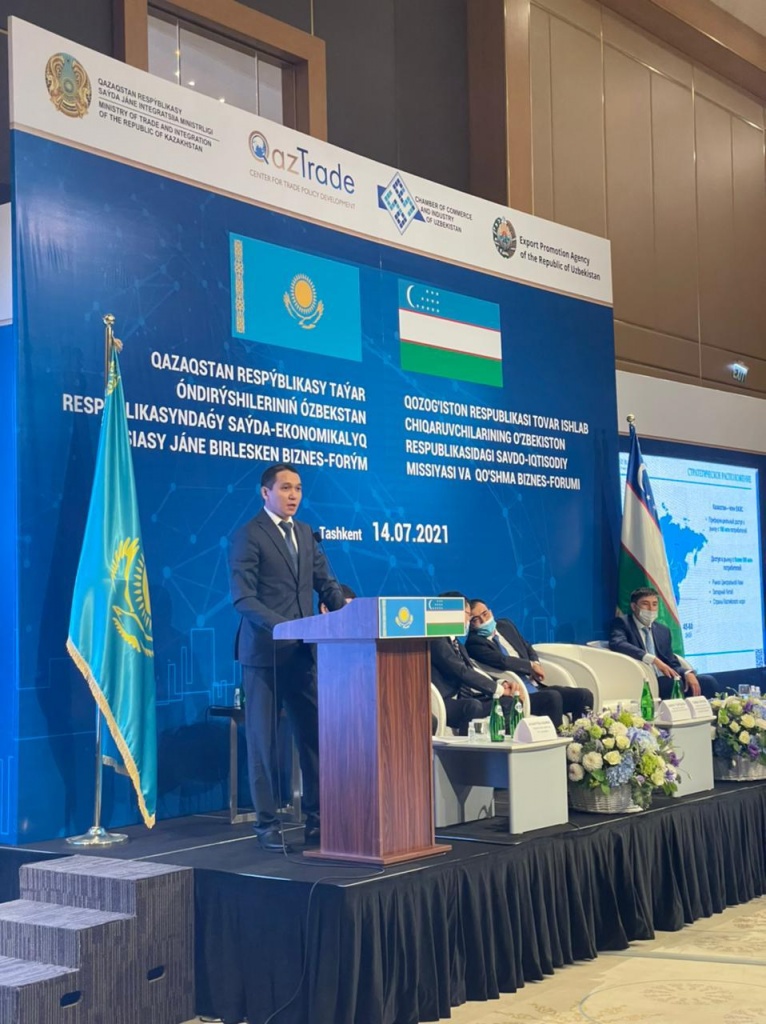 - "KAZAKH INVEST" is a national operator for supporting investment activities, providing a full range of services for investors. For potential investors, we provide comprehensive information about the country, as well as industry reviews and, importantly, specific investment projects prepared by our team. We organize targeted visits of investors to Kazakhstan and help them find a strong local partner", - added Kuat Zholdybekov.

In his welcoming speech, Deputy Director of the Export Promotion Agency of the Republic of Uzbekistan T. I. Yakubov noted the importance of cooperation between the companies of the two countries and the importance of export promotion.

Within the framework of the trade and economic mission, business representatives of the two countries held B2B meetings, during which they managed to conclude several memoranda of cooperation and export contracts worth a total of $ 52 million.

In particular, the Kazakh company "Aktobe Rail and Block Plant" LLP and the State Enterprise "Toshkent Shahar Khokimligi MODDIY-TEXNIK TA'MINOT BOSHQARMASI" signed a memorandum of cooperation for the supply of rail and block products. Export contracts were also signed for the supply of pasta, apple juice and mixed feeds to Uzbekistan.

A striking event was the conclusion of an agreement between JSC "Qaztrade" and the largest retail chain of Kazakhstan "Magnum" on increasing the supply of Kazakh products to Uzbekistan by 50 million US dollars in 2021.

- In the near future, Magnum plans to open a chain of stores in neighboring republics. As an export promotion company, we have been negotiating for a long time, and today they ended with an agreement to increase the representation of Kazakh products on the shelves in Magnum stores in Uzbekistan. Now Kazakhstani manufacturers will be able to conclude direct contracts for the supply to the Magnum-Uzbekistan network. This will allow our producers to increase their revenues and, very importantly, will become an incentive to increase production turnover", - commented Azamat Askaruly, General Director of QazTrade JSC.

He also noted that the promotion of goods through trade networks is today one of the most effective tools of trade, including cross-border trade. 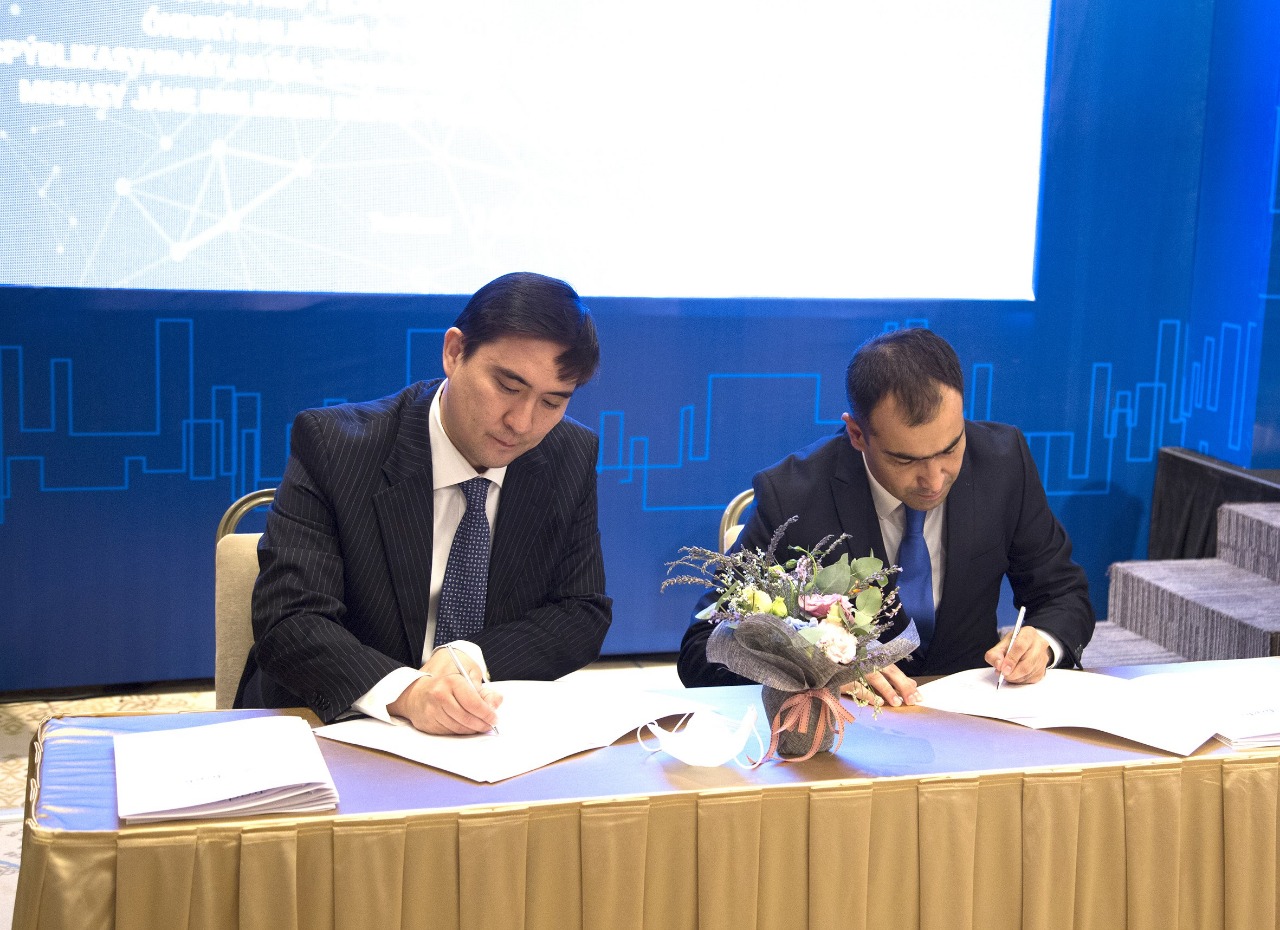 JSC "Center for the Development of Trade Policy "QazTrade" is the main operator of state measures to support and develop exports.

The main activities of the company are: development and promotion of non-commodity exports within the framework of a "single window"; export service support; conducting an independent assessment of the export potential of enterprises and their goods; analyzing the market of a potential importer and conducting a marketing campaign to promote goods; studying trade barriers to entering foreign markets and developing proposals for their elimination; reimbursement of part of the costs of exporters; providing analytical, consulting, information, technical support within the framework of Kazakhstan's membership in the WTO, the EAEU, as well as cooperation and interaction of the Republic of Kazakhstan with the OECD; conducting research in the field of trade and analysis of foreign markets, etc.