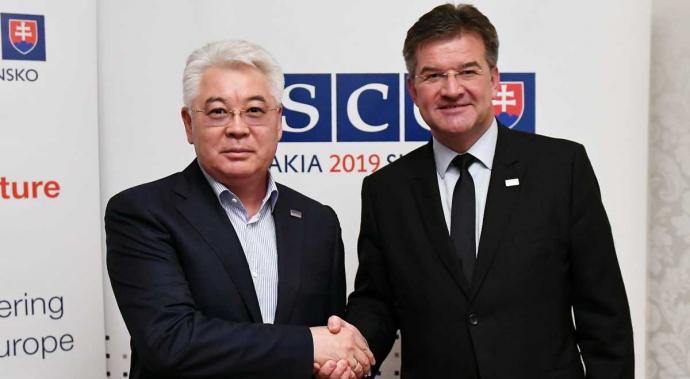 Within the participation in the Meeting of Ministers of Foreign Affairs of the Organization for Security and Cooperation in Europe (OSCE), held on July 8-9 in Slovakia, Foreign Minister Beibut Atamkulov held talks with OSCE Chairperson-in-Office and Slovak Minister of Foreign and European Affairs Miroslav Lajčák.

The sides discussed a number of issues related to interaction within the OSCE, as well as bilateral cooperation.

The Kazakh side praised the Slovak OSCE Chairmanship, which started on January 1, 2019. It was noted that Bratislava made a significant contribution to address the tasks facing the OSCE.

“We support the priorities set for the Slovak chairmanship in the OSCE and, in turn, we are ready to render any support to the successful fulfillment of the functions of the Chairperson," the Foreign Minister of Kazakhstan said.

One of the important topics of discussion was the Kazakh initiative to establish the OSCE Thematic Centre in Nur-Sultan on sustainable interconnection, aimed at analytic and research work on interconnection in its broad interpretation. They noted the timeliness and relevance of this idea, the implementation of which would increase the effectiveness of the Organization in the second (economic and environmental) dimension, would enhance its credibility and ensure a more balanced geographical representation of its institutions.

The OSCE Chairperson was also informed about the results of the recent presidential election, which had been the most competitive in the history of the country, the latest political changes in Kazakhstan and the course of President of Kazakhstan Kassym-Jomart Tokayev to ensure further economic growth of the country, with particular emphasis on improving the welfare of the population. It was noted that Kazakhstan would continue a constructive, balanced and multi-vector foreign policy course.

Amidst the ongoing turbulence of world politics, the sides noted the importance and timeliness of the initiative of the First President - Elbasy Nursultan Nazarbayev put forward in April to convene the “Three Dialogues", where the second dialogue implies combining the capabilities of the OSCE and the Conference on Interaction and Confidence Building Measures in Asia (CICA) to jointly solve security issues in Eurasia. In this regard, a good preparation for the meeting of the secretariats of the two organizations to be held this fall was seen as paramount.

The sides separately discussed the situation in Afghanistan that plays a special role in ensuring long-term stability and security in the OSCE area. In this respect, assisting in the restoration of Afghanistan by non-military methods was one of the priorities of the Kazakhstan's presidency in 2010 in the OSCE.

In that context, the Kazakh side proposed to hold a special event on Afghanistan in Nur-Sultan this autumn during the visit of the Permanent Representatives of the OSCE participating States to Kazakhstan. Holding such event by the OSCE will increase the Organization's involvement in resolving the situation and in post-conflict reconstruction of Afghanistan.

Regarding the issues of bilateral cooperation, the sides commended a rather high level of cooperation between Kazakhstan and Slovakia that last year marked the 25th anniversary of their diplomatic relations. Over the years, the countries have established a trusting and constructive dialogue, and have developed a legal and institutional framework.

Kazakhstan considers Slovakia as one of the key political and economic partners in Central and Eastern Europe and the European Union.

The meeting stressed the need to intensify the Kazakh-Slovak economic and trade cooperation and the interest of the Kazakh side to participate in joint projects. Today Kazakhstan has over 30 companies with the participation of Slovak capital.