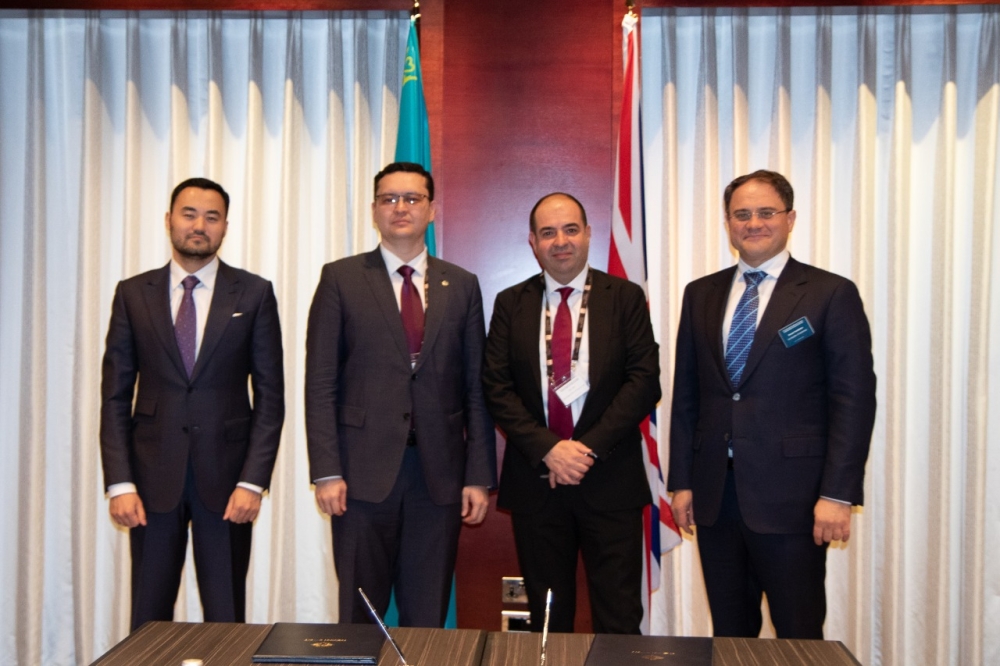 Investors are interested in implementing joint projects in the field of agribusiness, pharmaceuticals, machine building, petrochemical and processing industries. The development issues for trade-economic and investment cooperation were discussed on the sidelines of the Kazakhstan-British Investment Forum “Kazakhstan Global Investment Forum 2019” and the 3rd Session of the Kazakh-British Business Council held by the Ministry of Foreign Affairs of the Republic of Kazakhstan, KAZAKH INVEST and National Welfare Fund Samruk-Kazyna in London.

The Kazakhstan delegation, which included representatives of the public and private sectors, was headed by the Deputy Minister of Foreign Affairs of the Republic of Kazakhstan, Roman Vasilenko. The event was also attended by the Ambassador of the Republic of Kazakhstan to the United Kingdom of Great Britain and Northern Ireland Yerlan Idrissov, the Minister for Investment of the Ministry of International Trade of the United Kingdom Graham Stewart, the Minister for Foreign Affairs of the United Kingdom Christopher Pincher, the Ambassador of the United Kingdom of Great Britain and Northern Ireland to the Republic of Kazakhstan Michael Gifford, the Trade Envoy of the Prime Minister of Great Britain for Kazakhstan Baroness Emma Nicholson, the Chairman of the Management Board of Samruk-Kazyna Akhmetzhan Yessimov, Chairman of Investment Committee of MFA RoK Rustam Issatayev, the Managing Director of the Astana International Financial Center Kairat Kelimbetov and more than 200 representatives of official and business interests of the two countries.

The main objective of these measures is the further development of bilateral investment and trade and economic relations.

During the forum, participants discussed a wide range of cooperation, noting the mutual striving to strengthen cooperation in investment policy.

The Deputy Head of the Ministry of Foreign Affairs of Kazakhstan Roman Vasilenko spoke about the importance of further development of trade, economic and investment cooperation between Kazakhstan and the UK, and also confirmed the Kazakh side’s focus on expanding the spectrum of cooperation, including in such new areas as innovation, new technology, industry, agriculture, alternative energy.

“Today, Kazakh-British cooperation has the positive dynamics. The Great Britain is one of the largest investors in the economy of Kazakhstan. According to the results of our strategic partnership over the years, the United Kingdom brings not only capital to the economy of Kazakhstan, but also the technologies and managerial know-how required for diversification and integration into the global production chain” - stated Roman Vasilenko.

During the events, the Managing Director of the Astana International Financial Center Kairat Kelimbetov said: “Kazakhstan plays an important role in a number of regional integration processes which implies that our country can become a suitable platform: there are interesting local projects, and they can be expanded to the entire region. We connect East and West, between Hong Kong, Singapore and London, Nur-Sultan is the only financial center on this path which is governed by English common law."

In his welcoming speech, Minister for Investment of the Ministry of International Trade of the United Kingdom Graham Stewart said: “Our countries have definitely become stronger. In my opinion, the further development of trade and economic cooperation between the Great Britain and Kazakhstan has good prospects. At the same time, our partnership is not limited to this. Taking into account that your country has big plans to diversify the economy, the United Kingdom is ready to actively contribute to their implementation”.

During the visit, Roman Vasilenko also held bilateral meetings with the leadership of the Ministries and Departments of the Great Britain, international structures and senior figures from the business world.

It is worth noting that from the moment of gaining independence by Kazakhstan to the present, the UK is an important political and economic partner of our country in the European Union. Today, the UK is among the top 5 key trade and investment partners of Kazakhstan and a number of large joint Investment Projects in the petrochemical and processing industries, engineering, agribusiness and pharmaceuticals have been implemented.

The UK gross inflow of investments into domestic economy from 1993 to the 1st half of 2019 amounted to 25 billion US dollars.

At present, a List of 25 projects still under development has been compiled, within the framework of the Kazakh-British cooperation, which includes such projects as: construction of a Hospital, a Dairy farm and a Livestock Breeding Complex, a number of projects in energy and the Mining and Metallurgical Integrated Works.

In total, over 500 companies with British capital operate in Kazakhstan, including such companies as Royal Dutch Shell, Ernst & Young, BG, Shell, BAE Systems and others.

At the end of the Kazakh-British negotiations, a number of documents were signed, in particular, a Construction Agreement for a Dairy Farm in the Almaty region between the Direct Investment Fund and the United Green Group; a Memorandum on Co-operation between the Ministry of Health of the Republic of Kazakhstan and Gap Insaat Yatirim Ve Dis Ticaret A.S.; a Memo of Co-operation between Kazakhstan Center for Industry and Export QazIndustry and International Development Ireland Ltd (IDI).

Summarizing the Investment Forum and the 3rd Session of the Kazakh-British Business Council, the parties demonstrated their intention to further develop economic cooperation between the two countries and strong willingness of the parties in gradual and extensive implementation of the Projects.