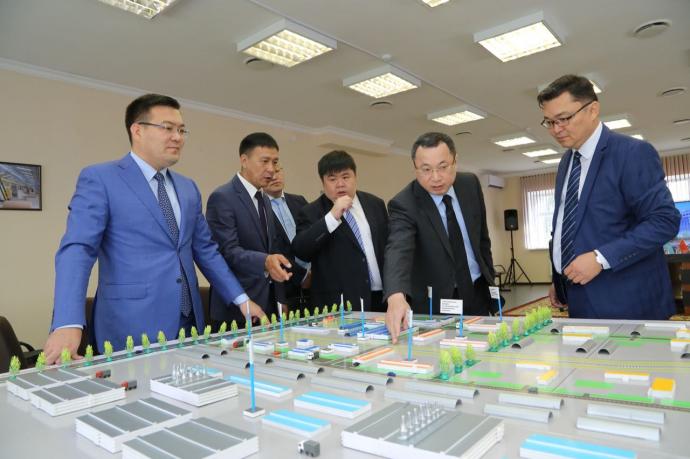 China’s HKC Corporation Limited’s shareholders visited the Industrial Zone of Kostanay and met with the Akim of Kostanay region Arkhimed Mukhambetov. The event was supported by Kazakh Invest.

HKC is one of the China’s top five manufacturers of monitors and television sets. The company intends to build an assembly plant in Kostanay. The volume of planned investments at the initial stage is estimated at $ 20 million, and the planned capacity of the plant is 3 million units per year.

"The advantage of Kostanay for us is its close location to Russia and other CIS countries. We have big plans for this project and we want to look deep into the matter before launching it,” said the Vice President of the company Li Jin. “Our main goal now is to reach the global level. We have an assembly plant in Holland, which produces 2 million TV sets per year. The plant we are going to build in the CIS will have a capacity of 3 million TV sets per year. "

According to Chinese investors, the project involves creation of 500 jobs. Employees of the future plant will be recruited fr om among the local population. In addition, HKC Corporation Limited intends to participate in the dual training program for college students in the region.

The Akim of the region A.Mukhambetov supported the idea of launching a plant for production of TV sets in Kostanay and expressed hope for further mutually beneficial cooperation. He reminded that a number of joint projects with Chinese companies are already being implemented in Kostanay region. For example, there is a project for production of cars and a comprehensive agro-processing project.

"We offer investors the territory of the industrial zone. We are already implementing 11 projects here. Most importantly, when compared with the Russian Federation, while we have the same rates for corporate tax, which is 20%, our VAT rate is lower than in Russia by 6%. They have 18%, and we have 12%,” said A. Mukhambetov. “We are ready to cooperate with your company. The market of electronics, wh ere your company is operating, is a free niche in Kazakhstan. Most of electronics in our country, which is about 90%, is imported. Your project will allow satisfy the demand for electronics not only in our country, but in Russia as well. We are open to mutually beneficial cooperation and guarantee all-around support."

As for the Kostanay’s Industrial Zone, it is almost finished today. Utility networks have been built, and a railway siding and motor roads are under construction. At the same time, rolling mills (plants) are being built in the industrial zone.

"A plant for production of tractors and a plant for production of building materials are already being built here, and there is a project with China in deep processing of wheat, which will be exported to China. As for HKC, they plan to produce TV sets and computers. The company plans to invest $ 20 million at the first stage. I think everything will be set ready very soon, and we may launch the plant in 2019," said the Deputy Akim of Kostanay region Meirzhan Myrzaliyev at the end of the meeting.

It should also be noted that HKC Corporation Limited’s representatives arrived in Kostanay at the invitation of the Akimat of Kostanay region made during the visit of the Kazakhstani delegation led by the Deputy Akim of the region M.Myrzaliyev to Beijing, PRC, in July 2018.

At the end of the meeting, the parties agreed to create a working group for the project and develop a road map for its implementation.

For reference: HKC Corporation Limited was founded in 1997. The initial business was production of monitors for computers. Using advanced technologies, HKC quickly became the leading manufacturer of displays in the Chinese market. In 2003, HKC provided a full range of 1 to 60-inch liquid crystal displays, including LCD monitors and LCD TV sets, and expanded the full range of tools, plastic injection and LCD backlighting, etc. In 2006, the HKC’s total sales grew up to $500 million, and exports amounted to about 40%. In 2007, HKC launched construction of a new industrial park in Shenzhen and opened branches in Russia and India. The company has established long-term and strategic relationships with many customers around the world.