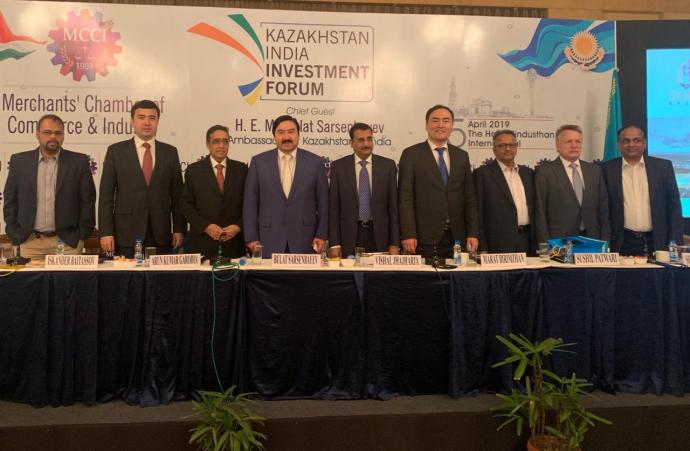 Kazakhstan-India Investment Forum was held in Kolkata.The forum was organized by the Kazakh Embassy in the Republic of India in cooperation with Kazakh Invest National Company and Merchants' Chamber of Commerce & Industry (MCCI) in Kolkata. In attendance were representatives of the Engineering Export Promotion Council (EEPC) of India, the Federation of Indian Export Organisations, expert and academic communities, mass media, as well as CEOs of over 50 major Indian companies (Indiapower, RUPA CompanyLimited, JGChemicals, KKGroup, MultiwynGroup, etc.)

In his welcoming speech, the Ambassador of Kazakhstan to India, Bulat Sarsenbayev, thanked MCCI's leaders in facilitating the establishment of contacts between the Kazakh and Indian business communities. The diplomat told about the key areas of Kazakhstan-India interaction, mapped out the areas of promising cooperation between the two countries, and also informed the forum participants of the upward dynamics of bilateral trade cooperation. Marat Birimzhan, Deputy Chairman of the Management Board at KazakhInvest, told about Kazakhstan's investment climate and the prospects for the implementation of business projects in the country. In particular, the forum participants were provided with detailed information on business opportunities in Kazakhstan, conditions, government support and competitive advantages for international investment. Marat Birimzhan demonstrated various top-priority investment projects in Kazakhstan and called upon Indian companies to be actively involved in the implementation of them. MCCI President Vishal Jhajharia underlined the consistent development of bilateral cooperation between the countries and highly appreciated the vast reforms underway in Kazakhstan, which, in a very short span of time, became an open country having a favorable investment climate attractive for doing business. Indian entrepreneurs showed particular interest in the projects in the fields of engineering, telecommunications, agriculture, mining, healthcare, etc. presented by KazakhInvest and Samruk-Kazyna.

As part of the forum, there also have been a series of bilateral talks with Indian colleagues. The sides reached accords on the joint implementation of a number of projects. In particular, a representative of ShimkentTemir LLP met with Indian partners to discuss the purchase of equipment producing direct reduced iron. Besides, the Kazakh delegation and representatives of TataSteel, one of the world's biggest steelmaking companies, held talks on cooperation in the field of metallurgy and the manufacture of metal products. It is to be recalled that Kazakhstan-India relations, which were established 27 years ago, have been developing in the spirit of friendship, partnership, and are based on the cultural and historical closeness of the two countries' peoples. Presently, the countries are fruitfully interacting across a wide range of sectors, such as space, military-technical cooperation, IT, Fintech, oil and gas, banking, to name but a few. Kazakhstan is the major importer of uranium to India. The current value of Kazakhstan-India trade turnover is $1.2 billion.