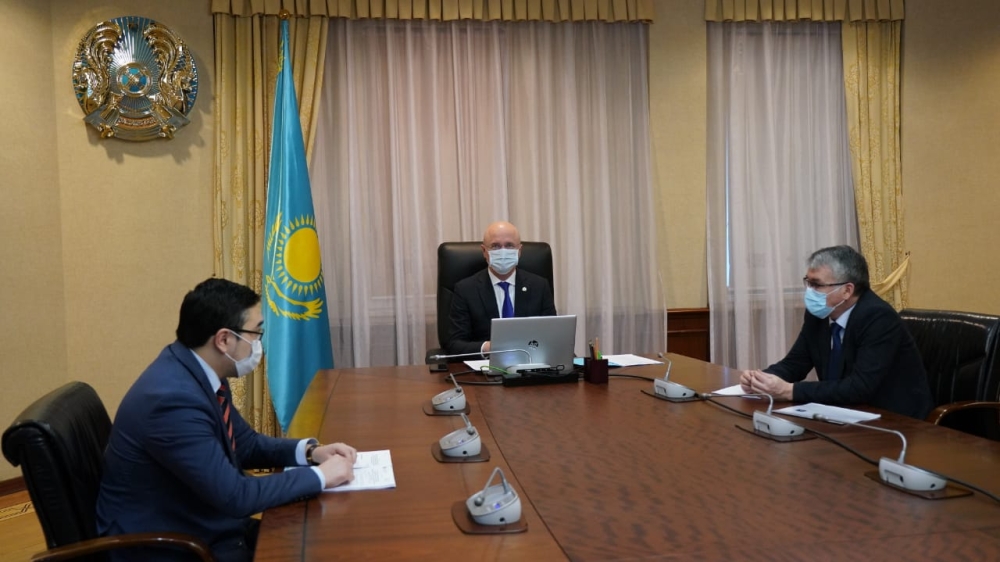 Implementation of the European Union's Green Deal programme, bilateral cooperation in renewable energy sector, as well as supply of critical raw materials necessary for implementation of the EU plans for the transition to a green and digital economy were covered during the 30th meeting of the Berlin Eurasian Club.

During his welcoming speech in the videoconference mode, Roman Sklyar presented the initiatives of the President of the Republic of Kazakhstan K. Tokayev to ensure sustainable economic growth and social support for the country's population during the pandemic. According to him, the development of the “green economy” is one of the priority areas.

“The key areas to which special attention is paid include energy efficiency, introduction of the best available technologies to enterprises, expanding access to green finance and facilitating the introduction of green technologies. I believe that it is necessary to strengthen and develop trade, economic and investment cooperation between the Republic of Kazakhstan and Germany, as the countries sharing common values» R. Sklyar noted.

In turn, the State Secretary of the Ministry of Foreign Affairs of the Federal Republic of Germany M. Berger spoke about the progress of the European Green Deal project aiming to achieve indicators of greenhouse gas emissions reduction by 55%.

During the panel discussion, the participants discussed issues of expanding cooperation in the field of green energy. They also considered joint steps to enhance cooperation within the framework of the Intergovernmental Partnership Agreement in the raw materials, industrial and technological fields.

At the same time, during the bilateral meetings, the Deputy Minister of Foreign Affairs of the Republic of Kazakhstan M. Baimukhan and Deputy CEO of KAZAKH INVEST G.Uzbekov discussed the prospects for developing partnerships and implementing new investment joint projects with the heads of German companies, such as DERA, Redpath Deilmann GmbH, BT Innovation Gmbh, Vorwerk & Co., Teppichwerke GmbH & Co. KG.

As a result of the meetings, German businessmen expressed interest in implementing projects for production of carpets, assembling equipment for projects in mining and metallurgy on the territory of the Republic of Kazakhstan and construction of residential facilities. In addition, the participants in the BEC meeting agreed to continue coordinating joint actions to minimize the negative consequences of the pandemic on the economic ties of Kazakhstan and Germany.

The event was organized by the Embassy of the Republic of Kazakhstan in Germany and KAZAKH INVEST jointly with the Eastern Committee of the German Economy.

For reference: The Berlin Eurasian Club was established in 2012 at the initiative of the First President of the Republic of Kazakhstan N. Nazarbayev and the former Vice Chancellor, Minister of Foreign Affairs of the Federal Republic of Germany H.-D. Genscher. The Berlin Eurasian Club is an informal dialogue platform open for participation with sides of prominent politicians, international experts, representatives of scientific, public and business circles of Kazakhstan, Germany and other European countries, who share the ideas and goals of Eurasianism.