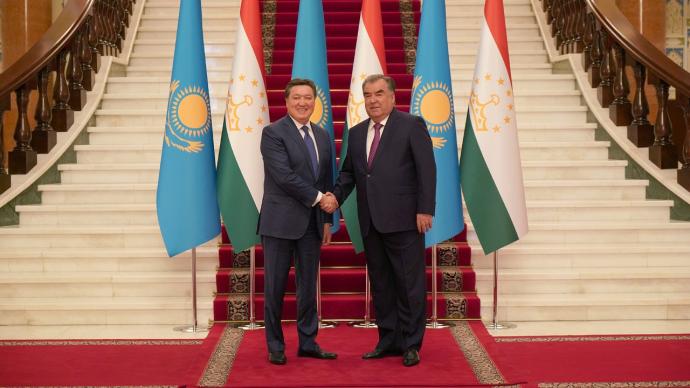 During the visit, the head of the Kazakh Government was received by the President of Tajikistan Emomali Rahmon. At the meeting, they discussed topical issues of bilateral trade and economic cooperation. Askar Mamin conveyed warm words of welcome on behalf of the First President – Elbasy Nursultan Nazarbayev and the Head of State of Kazakhstan Kassym-Jomart Tokayev.

“In Kazakhstan, they warmly recall your participation as an honored guest in the anniversary meeting of the Supreme Eurasian Economic Council,” said Askar Mamin.

In addition, intergovernmental negotiations were held on the prospects for expanding mutually beneficial multi-dimensional partnership. For 2018, the volume of bilateral trade between the countries increased by 8.2%. At present, the trade turnover is $900 million. Along with this, the volume of export-import transportation by road between Kazakhstan and Tajikistan has increased by 2.9 times and amounted to 16.9 million tons.

During the talks, the parties confirmed their intention to continue the implementation of the agreements reached on expanding the range and increasing the supply of Kazakhstani products. Attention was paid to the improvement of investment cooperation mechanisms in engineering, agriculture, industrial cooperation, energy, transport and communications.

“We are ready to expand our investment cooperation by creating joint investment projects,” said Askar Mamin.

As part of the official visit of the Prime Minister Askar Mamin to Tajikistan, a number of agreements were signed aimed at strengthening Kazakh-Tajik cooperation, totaling about $80 million: