VH GROUP, an Indian company, intents to invest 1 billion US dollars to the domestic poultry industry 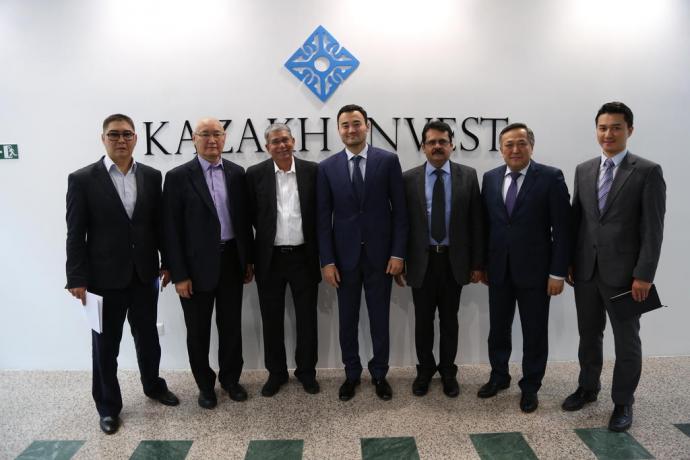 The meeting of Rustam Issatayev, Kazakh Invest NC JSC Deputy Chairman, with Magdum Murtuza Ali Ismail, general operations manager of VH GROUP company. In the course of the meeting the parties discussed the issues of further cooperation in the field of poultry industry took place on September the 22nd in Astana.

In the course of the dialog representatives of VH Group company – a leader in production of poultry goods in India – particularly noted high investment potential of Kazakhstan. While discussing prospective of cooperation the parties emphasized complex solution of issues of domestic poultry industry development. Further transformation of domestic feeding vegetation base in production of meat and meat products as well as involvement of local farmers as suppliers.

At the initial stage the Indian investor plans to construct a bio-technical park, which will include a laboratory for production of vaccines. Total volume of planned investments to the Republic of Kazakhstan economy amounts to more than 1 billion US dollars.

Rustam Isatayev Kazakh Invest NC JSC Deputy Chairman stated that for the first time an Indian transnational company comes to Kazakhstan with the purpose of starting business from the very beginning. Management of Kazakh Invest company expressed its readiness to provide all possible assistance in organizing of an inter-departmental work group and in creation of road map for this project.

For reference: VH Group company — is the largest poultry conglomerate in India, which exports the products to dozens of countries all around the world. As of today, the company owns 90% of chicken meat market share and more than 70% of broiler chicken market share in India. VH Group has several joint ventures and technical cooperation agreements with well-known American and European companies.