Kazakhstan will receive $1,7 billions of investments from Turkey 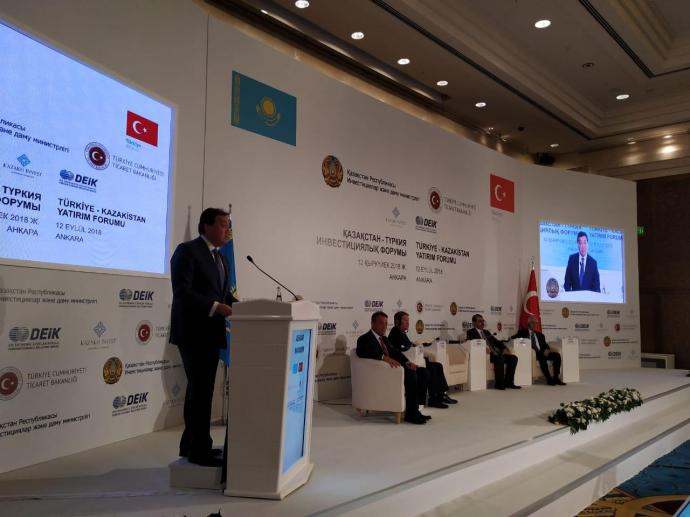 Within frameworks of Kazakhstan and Turkey investment forum in Ankara 24 commercial agreements were signed on investment and trade-economic cooperation between the two countries.

The projects with a share of Turkish capital are aimed first of all at development of non-resource sector of the country economy. Besides they will provide more than 3000 jobs.

“Today Turkey takes the second place in the number of companies with foreign capital share. Growing number of Turkish companies in our country is one of the basic factors contributing to exchange of capital, best practices and technologies between our countries”, - stated the First Deputy Prime-Minister of the Republic of Kazakhstan – A. Mamin, who opened Kazakhstan and Turkey investment forum.

Kazakhstan and Turkish companies have signed 24 commercial documents in the total amount of around 1,7 billions of US dollars. The documents are aimed at realization of different investment projects. Thus, for example, in Zhambyl region it is planned to build a factory for production of soda ash (Na2CO3), which is used in metallurgical, chemical and glass making industries, with total cost of 270 millions of US dollars with creation of 350 jobs.

According to understanding reached between Kazakh Invest and Eksen Group Turkish investors plan to build a new financial, social and business center – Downtown Almaty – in Almaty city at a cost of 300 millions of US dollars. Downtown Almaty will accommodate business centers, premium class apartments and JW Marriot hotel.

Mayor's administration of Turkestan region and DAL Holding have signed the Agreement on realization of the project pertaining to construction of a greenhouse facility at a cost of 200 millions of US dollars with creation of 700 jobs.

This reflects growth of interest of new Turkish transnational companies, which operate in industries of top priority for Kazakhstan economy. “We can speak of strengthening of expansion trend of large Turkish holdings on the market of Kazakhstan. Whereas traditional industries, where Turkish investors came, were in the past considered to be hotel business, production of construction materials at the level of small and medium business, today major Turkish companies open such new industries as mining and metallurgy, agriculture, agricultural chemistry, metallurgy, treatment industry and much more” - explained S. Tuyakbayev – chairman of Kazakh Invest National Company JSC Board of directors.

H. Arslan – chairman of YDA Holding Board of directors – has emphasized that Turkish investors are interested in expansion of their production in Kazakhstan due to political stability, conducive investment climate, opening access to markets of Eurasian economic union, Central Asia and West China. Constant improvement of legislation and implementation of new investment mechanisms such as state and private partnership – Astana International financial center – is of great significance.

Kazakhstan and Turkish investment forum has been arranged by Kazakh Invest with support from Republic of Kazakhstan Embassy in Turkey. The following persons have participated in the event: the First Deputy Prime-Minister of the Republic of Kazakhstan – Askar Mamin, the Minister of energy and natural resources of the Republic of Turkey – Fatikh Donmez, chairman of the board of directors of Samruk-Kazyna national welfare fund JSC – Akhmetzhan Yessimov, chairman of the board of directors of Atameken national chamber of entrepreneurs – Ablai Myrzakhmetov, the Minister of investments and development – Zh. Kassymbek, chairman of the board of directors of Kazakh Invest national company – Saparbek Tuyakbayev as well as representatives of more than 200 Kazakhstan and Turkish companies.