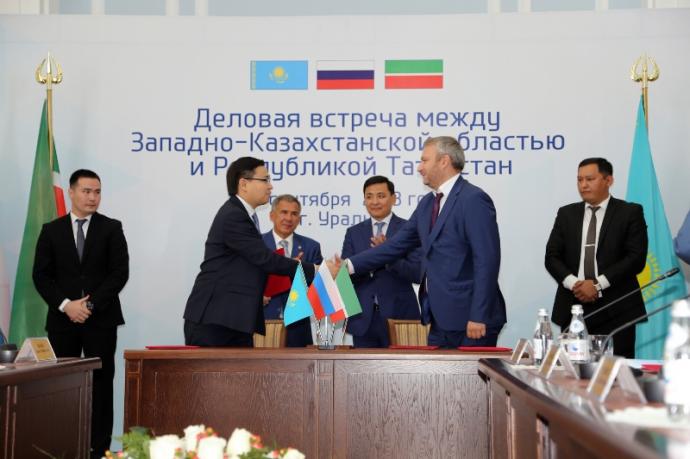 A Business forum was held in Uralsk, where representatives of the government and business of the Republic of Tatarstan and West Kazakhstan region participated. Rustam Minnikhanov the President of the Republic of Tatarstan, the head of the Tatar delegation. On the Kazakh side - Altai Kulginov akim of West Kazakhstan region, the administration of Kazakh Invest and representatives of the business community of the region.

- Kazakh-Russian relations are traditionally characterized by a high level of strategic partnership. Russia is the largest trade partner of Kazakhstan, and the Republic of Tatarstan makes a significant contribution to the development of these relations. Kazakhstan and Tatarstan are historically and geographically close to each other republics which link economic, cultural, social and political relations. Every year an interregional Forum is held with the participation of our Heads of states: if last year this forum was held in Chelyabinsk, this year it would be held Petropavlovsk, where the main goal is tourism development in Kazakhstan and Russia. In this direction, we have great potential for development, especially in the field of children and youth tourism, in which our region occupies the 1st place in Kazakhstan, and the regional center of children and youth tourism and ecology was awarded the honorary status of the UNESCO Club - said the Governor of Altai Kulginov.

– I am very glad that cooperation at the municipal level begins today. We have outlined several areas of cooperation – cultural, educational, tourist, national, research. In the near future, a tourism delegation from Uralsk will arrive in Tatarstan. We will consider the Kazakh structure of work with investors and the structure of development, organization of tourism for children and youth. For our part, we have outlined several interesting areas in which we will work together, R. Minnikhanov, the President the Republic of Tatarstan, remarked.

In accordance with his words, first of all, projects will be implemented in the trade and economic field, as the market of Tatarstan in Russia is quite massive and intensive.

In the course of the business meeting was the Deputy Chairman of the Board Каzakh Invest Marat Birimzhan, who presented a program of investment in the region and the main stages of work on promotion of investment projects in West Kazakhstan region. Marat Birimzhan also commented on the approaches of KAZAKH INVEST: "We have packed 48 investment projects for 2017 and 67 projects in priority sectors of the economy will be additionally packed by the end of the year. Investment teasers, business plans and financial models have been developed for perspective projects in accordance with international standards. At the same time, work is being done to target potential investors according to the profile of the target investor, for each project, as well as through a network of foreign representatives, work is being done to promote and explain the main investment advantages of the investment project to the interested parties".

Tatarstan President noted the high level of quality of Kazakh Invest and innovative mechanisms of attracting investment in Kazakhstan, and expressed the wish to exchange experience with the Ministry of investment of the Republic of Tatarstan.

As part of the business of the meeting a number of agreements on cooperation in trade-economic, scientific-technical, social, cultural and humanitarian, ship-building and tourism sectors were signed, as well as in the framework of the forum reached an agreement on the implementation of the project on tire recycling in the amount of 3 million euros.