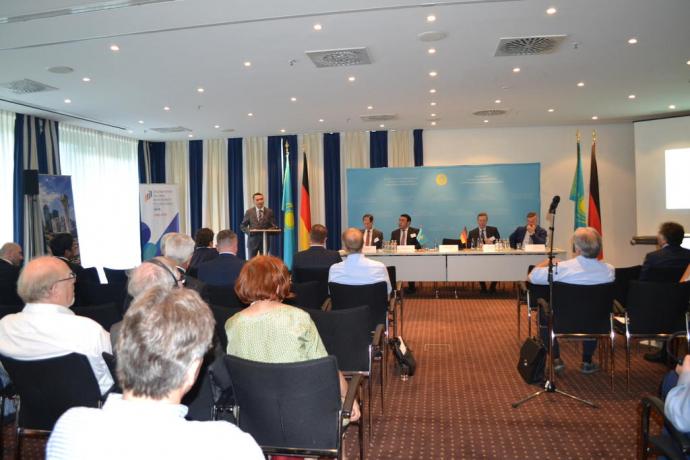 Within the framework of the agreements reached during the meeting of the Prime Minister of the Republic of Kazakhstan Bakytzhan Sagintayev with the leadership of the Eastern Committee of the German Economy within the framework of the AEF 2018, the Kazakhstan delegation led by the Chairman of the Board of the KAZAKH INVEST NC JSC Saparbek Tuyakbaev to Germany (Cologne, Düsseldorf, Berlin) to participate in the business forum on the issue “Investment Opportunities in Kazakhstan - Chances for German Companies”, organized jointly with the Chamber of Commerce and Industry of Cologne and the Eastern Committee of the German Economy.

During the event, KAZAKH INVEST NC JSC held a road show and presented possible investment projects in priority industries. In particular, detailed information on business opportunities in the Republic of Kazakhstan, legislative support, competitive advantages for attracting foreign investment in the context of the Kazakhstan-2050 Development Strategy, as well as the messages of the President of the Republic of Kazakhstan Nursultan Nazarbayev on socio-economic modernization of the country are presented.

During the forum, Saparbek Tuyakbayev, Chairman of the Board of Directors of KAZAKH INVEST, noted that about 2/3 of GDP of Central Asian countries falls on Kazakhstan, which ranks first among the countries of the Commonwealth of Independent States in terms of attracted investments per capita.

S. Tuyakbayev also talked about the current mechanisms for supporting foreign investors, including through a wide range of financial instruments of the AIFC.

According to KAZAKH INVEST, at present, world companies operating in Kazakhstan have access to the market with more than 500 million people. Through Kazakhstan, there is a multi-modal Eurasian transport corridor, which includes 5 rail and 6 international automobile routes, including the modern transcontinental motorway “Western Europe – Western China”.

Ambassador of Kazakhstan to FRG Bolat Nusupov speaking at the forum noted that the passing Forum is a clear evidence of dynamically developing relations between our countries.

“We can safely say that the current forum contributes to the further deepening of this process, the strengthening of cooperation with the FRG. I am convinced that such a partnership will contribute to the intensification of mutual trade, economic and cultural ties, the development of tourism, the better understanding and friendship of the peoples of our countries. I would like to note that in Kazakhstan there are already more than 1500 joint and 900 German enterprises. We would be happy if this list is further expanded. Kazakhstan is interested in such a partner and is ready to make its contribution to make it successful”, - B. Nusupov said.

Representatives of Germany economic, expert and business circles praised Kazakhstan efforts to create a favorable investment climate and noted that Kazakhstan remains FRG key economic partner in Central Asia and an important connecting bridge between Europe and Asia along the Great Silk Road trajectory. As noted by the Managing Director of the CCI Cologne Alexander Höckle, effective measures taken by Kazakhstan in the field of investment protection and promotion have increased the number and quality of projects of German companies in Kazakhstan.

Within the framework of the visit, the Kazakh delegation also visited the technology park Zoz Technology Center (ZTC) and the technological cluster center of Continental AG in Düsseldorf, and held a number of bilateral meetings with the leadership of leading companies.

As part of their stay in Germany, about 25 bilateral meetings of the Kazakh delegation with the leadership of economic associations and German companies in the fields of engineering, agriculture, construction materials and an agreement on 5 potential investment projects were held.

In addition, the meeting with the managing partner of the Schneider Group company Ulf Schneider was held. It should be noted that within the framework of the event KAZAKH INVEST signed an agreement on cooperation with Schneider Group.