From 2019 to 2021, about 320 projects to be introduced on the territory of special economic and industrial zones 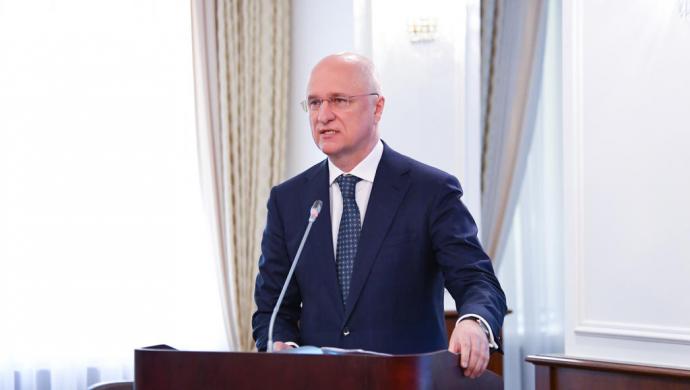 May 21 at the meeting of the Government chaired by the Prime Minister Askar Mamin, the development of special economic zones and industrial zones was considered.

According to the Ministry of Industry and Infrastructure Development, today, 12 free economic and 23 industrial zones work in the country.

“In total, 183 projects have been launched in the territories of the zones, of which 46 are with foreign participation. Over 15 thousand jobs were created. About 150 billion tenge was returned to the budget in the form of taxes,” Sklyar said.

On industrial zones, 168 industries were launched, with an investment volume of about 183 billion tenge, which created more than 8.5 thousand jobs. A total of 85.9 billion tenge was invested in the infrastructure. Thus, 2.1 tenge of investments were attracted for 1 invested budget tenge.

According to Sklyar, by 2021, 147 projects worth over $2 trillion will be implemented in the territories of thezones. In 2019, 36 projects will be launched totaling more than 160 billion tenge, with the creation of about 1,200 new jobs.

Vice Minister of Energy Asset Magauov, in turn, reported on the development of the special conomic zone "National Industrial Petrochemical Technopark." Thus, as of May 1, 2019, since the start of the implementation, the production amounted to 10.1 billion tenge, 2,600 jobs have been created.

The main projects of the zone are the production of polypropylene and polyethylene with a total value of $9 billion. Contribution to GDP of only two of these projects will be 1.5%. In addition, private investors are expected to implement projects for the production of polyethylene terephthalate, methanol and cyclohexane, which are at different stages of development, by private investors.

These projects will attract about $2.5 billion in investment and create up to 10,000 jobs during the construction phase and 1,500 during the operation phase.

Managing Director of Sovereign Wealth Fund Samruk-Kazyna JSC Alisher Pirmetov reported on the work of the Samruk-Kazyna Fund regarding special economic zones. According to him, in Oct. 2016, all 68 infrastructure facilities of the Khorgos – Eastern Gate were launched. In July 2015, the operation of the dry port of the SEZ Khorgos began. From July 29, 2015 to May 1, 2019, a dry port handled 317.4 thousand containers in twenty-foot equivalent. In 2018, over 9.3 billion tenge of private investment was mastered on the Khorgos – Eastern Gate.

Chairman of the Board of the Samruk-Kazyna Fund Akhmetzhan Yessimov noted that the fund is carrying out the main construction of infrastructure, among which the largest project is the gas turbine station. Construction is scheduled for completion a year earlier — at the end of 2020. According to the Khimpark Taraz special economic zone, for 7 years, 30 billion tenge was mastered, of which 8 billion tenge was mastered in 2018. All work is fully completed. The task was to replenish this industrial zone with other projects.

Deputy Prime Minister Zhenis Kassymbek noted that a month earlier a number of changes had been made to the Law on Special Economic and Industrial Zones, which simplifies the procedures for obtaining government support, at the same time, increases the requirements for managing companies. Work in this direction will continue.