A new stage of economic cooperation between Kazakhstan and France 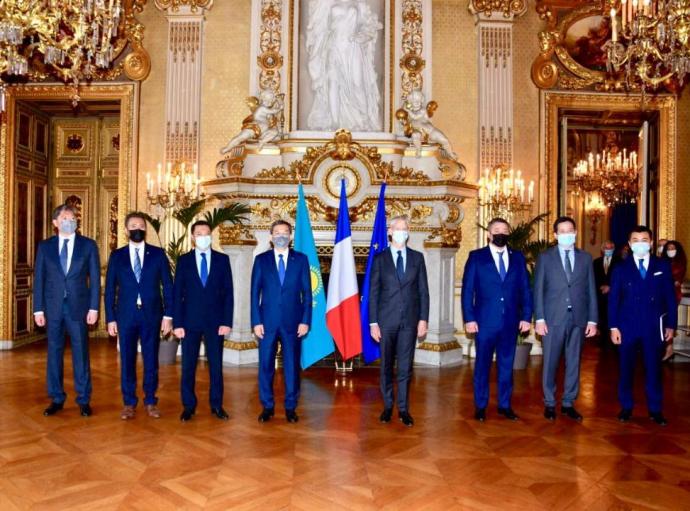 Paris, April 29-30, 2021 - The 14th meeting of the Kazakh-French Intergovernmental Commission on Economic Cooperation (IGC) was held in Paris with the participation of the Vice-Minister of Industry and Infrastructure Development of the Republic of Kazakhstan Amaniyaz Yerzhanov and the Minister-Delegate for Foreign Trade and Economic attractiveness under the Minister for Europe and Foreign Affairs of the French Republic Franck Riester.

Taking into account the epidemiological situation in both countries, the negotiations were organized in a hybrid format with online connection of representatives of ministries and companies of the two countries.

The Kazakh delegation also included Deputy Minister of Foreign Affairs Almas Aidarov, Ambassador of the Republic of Kazakhstan in France Jean Galiev, co-chairman of the Business Council Aidan Karibzhanov and other officials.

The meeting of the IGC was preceded by telephone conversations between Deputy Prime Minister - Minister of Foreign Affairs of the Republic of Kazakhstan Mukhtar Tleuberdi and Minister of Europe and Foreign Affairs of France Jean-Yves Le Drian. In addition, on April 26, online negotiations were held between the IGC co-chairs, Minister of Industry and Infrastructure Development of the Republic of Kazakhstan, Beibut Atamkulov and Franck Riester. These negotiations once again confirmed the commitment of the parties to continue close interaction in the spirit of strategic partnership across the entire spectrum of bilateral relations.

During the exchange of views, the IGC members emphasized the high dynamics of the development of cooperation in the traditional sectors of bilateral interaction such as energy, industry, transport and logistics, construction, aerospace and the military-industrial complex.

At the same time, at the meeting of the IGC, new projects and proposals in the field of renewable energy sources, digitalization, agribusiness and sustainable development were discussed.

For example, Total Energies is exploring the possibility of a 1 GW solar power plant project, Syctom plans to launch a food waste processing demonstrator in Akkol with a French government grant of € 500,000, Loste Group is negotiating with Kazakh partners to create production of halal fuagra. Also, the Franco-Turkish company TAV announced the completion of the acquisition of the airport in Almaty and will begin its modernization in the near future.

Following the meeting, an agreement was reached to sign, within the framework of F. Riester's upcoming visit to Kazakhstan, the Roadmap for Kazakh-French economic cooperation until 2030. This document will mark a new stage in bilateral strategic partnership and will become a powerful impetus in the development of two-way communication. The next meeting of the IGC will take place in Kazakhstan.

Continuing the visit of the Kazakh delegation on April 30, a round table was held at the site of the largest association of the French business community MEDEF with the participation of such French companies as Orano, Alstom, Air luiquide, Airbus, Vicat, Idemia, ADP, Egis, Iveco France, Suez International, Thales. During the event, a detailed exchange of views took place on the post-pandemic development of trade links and promising areas of cooperation. The MEDEF delegation will accompany F. Riester during his visit to Kazakhstan and is committed to productive negotiations in Nur-Sultan.

Also, at the Embassy of the Republic of Kazakhstan in Paris, a Memorandum of Cooperation was signed between the Deputy Minister of Foreign Affairs of the Republic of Kazakhstan A. Aidarov and the Deputy General Director of PCM Company Frederick Gard on the project of opening the production of screw pumps for the oil and gas and food industries in Aktau. The project involves investments of up to 5 million euros over five years.

In addition, a meeting was held with the Regional Director for CIS countries of the ADEO Group, David Glasson, who spoke about plans to expand the retail network of stores selling household goods and repairs “Leroy Merlin”.

The meetings and negotiations that took place demonstrated the desire of French business to resume the active study of mutually beneficial projects that were suspended due to the pandemic.

Source: The Ministry of Foreign Affairs of the Republic of Kazakhstan