​Kazakhstan and the United States aim at strengthening the economic partnership 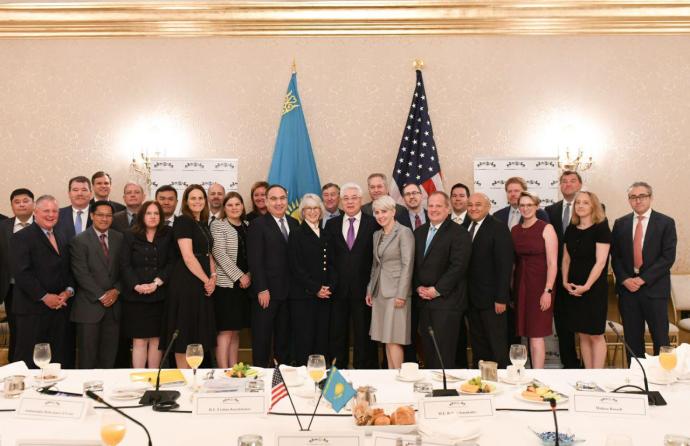 On his first day of the official visit, Foreign Minister Atamkulov holds business breakfast with the members of the «US-Kazakhstan Business Association» and series of meetings with the CEO-s of major American companies and corporations.

The Foreign Minister informed American business community about recent events that took place in Kazakhstan. «Our country held presidential elections. We have ensured a peaceful transfer of powers fully in line with the Constitution. This provided economic partners and investors with guarantees of maintaining stability and successful development of Kazakhstan», - said Atamkulov.

It was noted that Kazakhstan appreciates the interest of American companies in our country and looks forward to expanding long-term presence of American business. Kazakhstan can and should act as a platform for services and products with high added value for further export to the international markets.

The President of International Tax and Investment Center Daniel Witt, having recently visited Kazakhstan as an independent observer during the presidential elections, highlighted the significant progress in ensuring free and fair elections. “Overall, the elections were held in a very transparent manner. In Kazakhstan, there was no a transfer of power to a certain successor, it is in fact a full scale elections that allowed the people to demonstrate their will and choose the president of the country", - he said.

Minister of Foreign Affairs emphasized that given President Kassym Jomart Tokayev's policy on diversification of national economy, Kazakhstan is interested in large attraction of American experience and capital for realization of major high tech projects including processing and manufacturing industries, development of infrastructure, agriculture, communications and IT technologies.

During the meeting with Trevor Gunn, the Vice President of Medtronic, the Minister drew attention to the priorities of modernizing healthcare, including at the level of primary health care, digitalization and the rapid introduction of innovative and effective methods of diagnosis and treatment of diseases. Positive cooperation with this company in the field of equipment supplies and personnel training was noted. Considering that Medtronic is one of the largest companies in this field, Kazakhstan's interest in accessing the latest medical technologies was confirmed.

As part of the talks with the Senior Vice President of the Citi Group, Rick Johnston, Minister Atamkulov highlighted the Group's long term support towards Kazakhstan's integration into the global financial space and attracting international investment. Citi is one of the largest Western investors in the non-primary sector of Kazakhstan's economy and has established itself as a reliable corporate bank, becoming the main partner for the vast majority of international corporations operating in Kazakhstan.

The agricultural sector also has significant prospect for cooperation. The conditions created in Kazakhstan in combination with advanced world technologies will ensure the growth of the productivity of the agro-industrial sector in our country and occupy a niche in the world food supply system.

The ExxonMobil Corporation continues to make a significant contribution to the development of the oil industry in Kazakhstan and continues to be a key player in hydrocarbon production.

Kazakhstan is interested in further developing cooperation with American companies and attracting American investments and advanced technologies in the construction of petrochemical enterprises. “We highly appreciate the successful work of the company on projects for the development of Tengiz and Kashagan fields. These projects are important to the country. Kazakhstan is interested in the implementation of full-scale development of Kashagan and increasing oil production", the Foreign Minister noted.

The USA remains one of the largest investors in the economy of Kazakhstan and is considered by our country as a source of innovations and advanced developments in various sectors of the world economy.

In the light of the successful implementation of the agreements reached during the visit of the First President - Elbasy Nursultan Nazarbayev to the USA in January 2018, there is an active growth of cooperation between the business communities of the two countries.

During 2018, more than 30 joint economic events were held between Kazakhstan and the United States. Among them, the visit of the US Certified Trade Mission led by US Secretary of Commerce Wilboro Ross to Astana in October 2018, the Investment Conference in Kazakhstan at the headquarters of the Council on Foreign Relations (CFR) in New York last fall were very productive.