Kazakhstan Global Investment Forum 2018: prospects for investing in Kazakhstan were presented in London 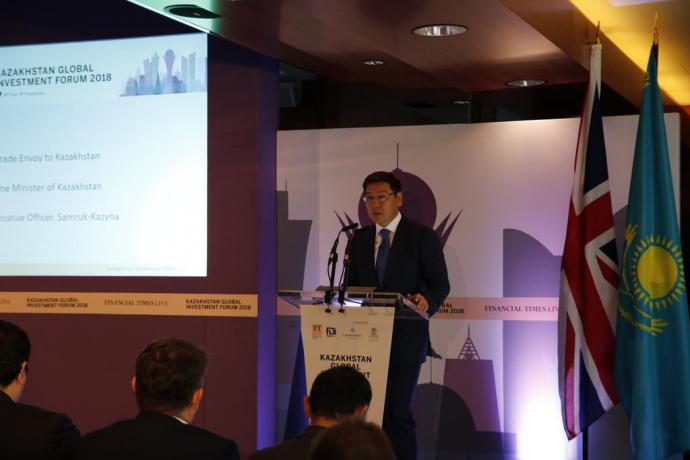 On October 2, Kazakhstan Global Investment Forum 2018 was held in London (United Kingdom). Over 150 business representatives took part in the event. The Kazakhstan delegation was headed by the Deputy Prime Minister of the Republic of Kazakhstan A. Zhumagaliyev.

The forum was devoted to new opportunities in the field of business and investment, as well as the prospects of Kazakh-British projects in the fastest growing sectors of the economy of Kazakhstan. The main topics were current innovations in improving the country's investment climate, including tax and customs privileges, the State Property Privatization Program, the favorable geographical position of Kazakhstan at the crossroads of Europe and Asia, participation in the Chinese initiative “Belt and Road” and the Eurasian Economic Union, and AIFC, the territory of which is subject to English law.

The participants include more than 150 senior executives from the manufacturing, agricultural, chemical, mining, and financial sectors, as well as the fields of metallurgy, alternative energy, logistics and digital technologies, incl. representatives of such large international corporations as Mitsubishi UFJ Financial Group, JP Morgan Bank, Deutsche Bank, Morgan Stanley, Ernst & Young LLP, PricewaterhouseCoopers, the London Stock Exchange, and many others.

“Kazakhstan is interested in attracting British investors who will bring with them the capital, technology and best business practices necessary for successful diversification of our economy and its integration into the global system,” said A. Zhumagaliyev, speaking at the forum. The UK is one of the largest investors in the economy of Kazakhstan. It accounts for  13 billion USD  out of  300 billion USD raised over 27 years of independence.

The head of the Astana International Financial Center, K. Kelimbetov, devoted his presentation to opportunities opening up for investors, taking into account the work of the AIFC. Thus, the AIFC provides its members with a special tax regime of up to 50 years, guarantees an independent system of dispute resolution based on English common law. The official presentation took place in July of this year.

“The launch of the International Financial Center Astana this year will also transform Astana into a regional financial center that will further promote your business to new heights,” Mr. Kelimbetov summarized his speech to the forum participants.

Vice-Minister of Investment and Development A. Kabikenov spoke about the development of the investment climate in Kazakhstan. Today, Kazakhstan takes 36th place from 190 countries in the Doing Business 2018 rating of the World Bank. It means a number 1 in the “Protection of Minority Investors” section and number 6 in the “Conclusion of Contracts” section. By 2050, Kazakhstan should enter the top 30 developed countries of the world. To ensure further economic growth, the Government of the Republic of Kazakhstan continues to pursue a policy of attracting investments. Last year, the National Investment Strategy was adopted, which identified priority sectors for attracting investment. Mining and metallurgy are among the most important sectors of the economy, accounting for more than 21% of exports. However, there is great potential in the exploration and development of copper, gold, phosphate and rare earth metals, including lithium and vanadium. Of particular interest are investments in exploration and development of new technologies for processing raw materials.

“This year we have adopted a new subsoil use code, based on the “first-come, first-served” principle. It also facilitates free access to geological information and reduces the time for granting mineral rights for solid minerals from 18 months to 10 days,” said A. Kabikenov.

Chairman of Kazakh Invest S. Tuyakbaev, in turn, informed the forum participants that the company had identified and prepared 70 niche projects in priority sectors of the economy - agriculture, chemistry and petrochemistry, mining and metallurgy, mechanical engineering and metallurgical engineering, tourism, and energy.

“We provide a wide range of services, from contacting local companies to project support for investment promotion, acting as a “variety store” for all investment inquiries and needs. Kazakh Invest plays the role of a single point of contact, representing the Government when discussing proposals and conditions for investment projects in Kazakhstan,” said S. Tuyakbayev.

Kazakh Invest has a wide range of representatives all over the world. This makes it easier for investors to explore opportunities for business growth and market expansion in the region. There are also local representatives in the regions of Kazakhstan, who are actually advisors to akims. They ensure the smooth operation of investors and consider all their questions and needs. In addition, the company simplifies interaction with government agencies and local authorities when investors need to register a business, obtain permits, licenses or any other government services, including government support for investors, for example, when creating investment contracts, registering as a participant in special economic zones, applying for innovative grants, etc.

The Trade Envoy of Great Britain for Kazakhstan, Baroness Emma Nicholson, speaking at the plenary session, stressed that “the interests of Great Britain are not limited to the mining industry of Kazakhstan, the privatization program and the development of Astana as a Eurasian financial hub. We also want to participate in the diversification of your economy.”

In turn, the head of the EBRD, Suma Chakrabarti, stressed that Kazakhstan has the necessary potential to become a vivid example for other countries seeking to build a sustainable market economy that works in the interests of the whole society and is open to the rest of the world.

The outcome of the forum was the conclusion of a number of agreements with British companies in the fields of transport and logistics, metallurgy, energy, agriculture, engineering, and also in the field of developing the infrastructure of the health care system. The NWF Samruk-Kazyna JSC and the EBRD signed an Agreement on the provision of a guarantee to the loan agreement between ShalkiyaZinc LTD and the EBRD. The Fund has acted as a guarantor of obligations for financing the construction of a concentrator at the Shalkiya deposit in the Kyzylorda region.

With companies operating in the mining and metallurgical sector with the use of new processing technologies, projects on the processing of non-ferrous metal ores were discussed, and agreements were reached on further information exchange with the participation of representatives of the companies initiating the projects. Agreements have been reached with the Independent Power Corporation on facilitating its participation in tenders related to the construction of energy facilities in the Republic of Kazakhstan and facilities in the field of logistics and data centers using UKEF funds. The representatives of the Department of International Trade discussed the prospects for the cooperation of British companies in the implementation of the One Belt, One Road program, agreements were reached on further cooperation and information exchange regarding the implementation of projects in the agricultural sector, mining, and gas and petrochemical industries in projects oriented to the PRC. Agreements were reached with a number of companies operating in the field of infrastructure construction, water disposal and water supply, health care, to assist them in further negotiations with relevant ministries and organizations of Kazakhstan.

For reference: the UK is among the top 10 trading partners in terms of turnover, as well as among the six largest investors in Kazakhstan, which is almost 5% of the total volume of attracted foreign investments.

Bilateral trade between Kazakhstan and the United Kingdom in 2017 increased by 1.5% and amounted to  1.28 billion USD. Exports rose to  926.7 million USD. In the first quarter of 2018, the total turnover of mutual trade amounted to  252.6 million USD, exports from imports amounted to  158.8 million USD and 93.8 million USD, respectively. More than 800 legal entities, branches, and representative offices with British participation are registered in Kazakhstan.
Install the application:
1) Open the website in Safari
2) Click save
3) Add to home screen