KAZAKH INVEST took part in the Kazakh-Chinese investment round table 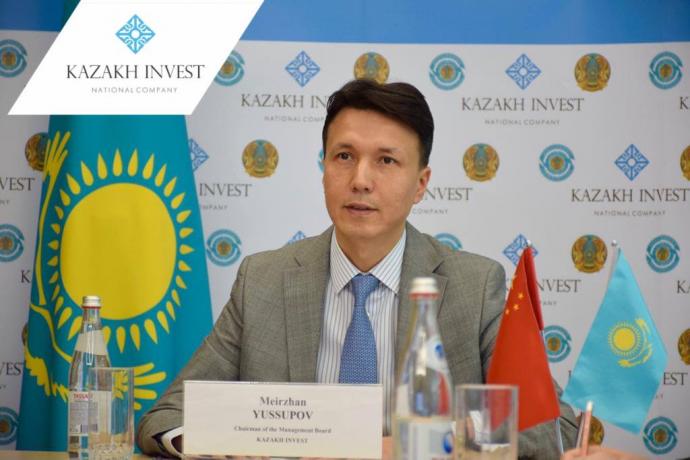 Issues of investment cooperation in the mining industry were discussed at a round table held within the framework of the Kazakhstan-China Business Council. The event was organized by the Embassy of the Republic of Kazakhstan in China and «Samruk-Kazyna» JSC.

The round table was attended by Deputy Minister of Foreign Affairs of the Republic of Kazakhstan Almas Aidarov, Chairman of the Management Board of «NC «KAZAKH INVEST» JSC Meirzhan Yussupov, as well as the management and representatives of «NWF «Samruk-Kazyna» JSC, «NGC «Tau-Ken Samruk» JSC, «NGC «Kazgeologiya» JSC, Astana International Financial Centre (AIFC), the expert community, large state and private companies of the People's Republic of China specializing in international investments in the MMC industry.

During the event, the most promising segments of the mining industry of the Republic of Kazakhstan for the implementation of joint investment projects, the potential of the Kazakhstan mining market for junior companies, attractive Kazakh projects in the field of geological exploration and subsoil use, searching for foreign investment were discussed.

In turn, the Chairman of the Management Board of «NC «KAZAKH INVEST» JSC Meirzhan Yussupov spoke in detail about the system of state support for foreign investors, which includes various industry benefits and preferences. In his speech, he also noted that the MMC industry remains one of the key drivers of the country's economic growth and a factor of its investment attractiveness.

«As part of attracting investment in the MMC industry, we have prepared a pipeline of niche projects of private initiators who are ready to cooperate with foreign businesses. Together with international consulting companies, we have developed project documentation for more than 40 niche projects worth more than $10 billion. We are ready to present these investment proposals to potential foreign partners. The initiators of the projects, for their part are open to negotiations and ready to consider various options for cooperation», - added Meirzhan Yussupov.

Following the results of the round table, the KAZAKH INVEST Representative Office in Beijing held a number of meetings with the management and representatives of Chinese mining companies, discussed issues of possible cooperation on a number of Kazakh investment projects. In several areas, an agreement was reached on further cooperation to study the details of Kazakhstan's mining investment projects.