On April 9, Kazakhstanis received disappointing news that one of their favorite chess players, the national and world champion Dinara Saduakassova, had to withdraw from an online chess tournament due to poor internet connectivity. In a video posted online, Dinara lamented that, during the game, she was more worried about the connection than the match.

Although chess may not seem like a life or death concern, there are a myriad of other, more critical opportunities that tens of millions of people across Central Asia are missing out on because of poor internet connectivity. These include jobs, education, collaboration, innovation, and civic participation, among others.

Meaningful digital connectivity, that is, connectivity that is available, accessible, relevant, affordable, safe, trusted, and user-empowering, is a necessity in today’s world —and increasingly, a human right.

Unfortunately, Central Asia still has a long way to go to ensuring good connectivity and enabling economies and people to benefit from digital development.

Nearly half the population in Central Asia is not digitally connected, and many of the unconnected live in rural and remote areas. In fact, three out of the five countries in Central Asia are below the global average in terms of the number of individuals using the internet.

But lack of access is not the only problem. An internet connection in Central Asia is expensive, and of poor quality. The low quality of connectivity is a problem even in Kazakhstan, as Dinara Saduakassova can attest, even though it has the highest internet penetration in the region.

All of the Central Asian countries are near the bottom of the global ranking on the average time taken to download a 5GB film or a three-hour full HD (1080p) educational lecture on YouTube. Among Central Asian countries, the Kyrgyz Republic scored highest and yet reached only 146th place globally, 12 minutes ahead of Kazakhstan. 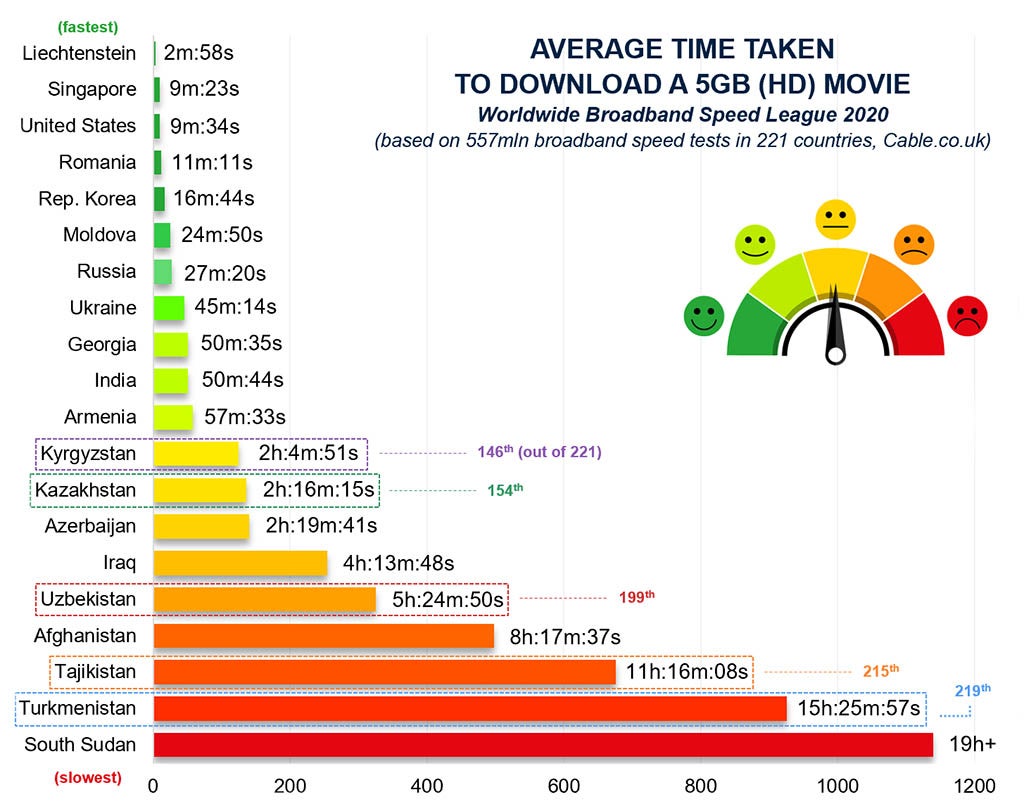 Governments in Central Asia have demonstrated that they can move fast when necessary. For example, Uzbekistan almost doubled its fiber-optic infrastructure from 36,600 kilometers in 2019 to 68,600 km in 2020, and simplified permits for the construction and launch of cell towers, thus enabling an accelerated rollout of mobile networks.

And there are many more examples across the region, from improving access to digital government services to setting up call centers and hotlines and launching channels and information platforms—all of these changes prompted by the need to swiftly respond to the recent pandemic.

Nevertheless, the governments of Central Asia still need to address the root causes of the region’s poor connectivity.

To connect the remaining half of its population to the internet by 2030, it is estimated that countries need to invest at least $6 billion. This will require unwavering political will and an unprecedented multi-stakeholder effort, including a massive influx of private investment for infrastructure deployment and public sector efforts in digital skills development and policy reforms.

So how do we get to meaningful connectivity for all?

First, Central Asian countries need to develop open and competitive telecom markets. They can do this by modernizing the institutional, legal, and regulatory frameworks, bringing them all up to international best practice standards. In this context, it is equally important that the countries remove restrictions on access to all wholesale and retail internet services (including to international gateways) and simplify the burdensome licensing procedures.

Second, the telecom sector needs to be transformed from a state-dominated model to one driven by the private sector: the region must attract private investments to cover the infrastructure needs, particularly in rural and remote areas. Those areas are often commercially unprofitable for private operators. What can be done in such cases is to encourage infrastructure sharing, apply state-aid mechanisms (e.g., award competitive subsidies), and design public-private partnership models.

It is also essential to strengthen the regulatory authority of the telecom sector by granting it the necessary authority to ensure a level playing field among market participants. In addition, the incumbent telecom state-owned enterprises could be “unbundled” to focus on the wholesale infrastructure markets and reach every corner of the country, while stepping out of the retail markets to let the private sector deploy the “last mile” connectivity and focus on customer service innovations.

Third, governments in Central Asia need to develop a digital ecosystem. This includes investments in increasing access to digital devices, enhancing local content, and developing the digital skills of the population. To reap the full spectrum of benefits offered by the digital world, Central Asian countries will need to build capacities for remote work and boost cybersecurity and data protection for citizens and businesses alike.

The World Bank will continue to support Central Asian governments in these efforts, including through our ongoing Digital Central Asia-South Asia program (Digital CASA), which is helping to bring reliable and affordable internet services to the region, link small and medium-sized businesses as well as workers to the regional and global digital economy, create more and better jobs, and catalyze innovations in the delivery of public and private services.

Central Asian countries could seize the moment to ensure inclusive and meaningful digital access for all. This will do a lot more than just help Dinara’s chess game, as it will help speed up economic recovery, create jobs, and promote much-needed growth throughout the region.