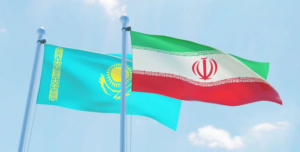 ASTANA – Kazakh President Kassym-Jomart Tokayev signed a law on Oct. 12 ratifying the agreement that leads to the formation of a free trade zone between the Eurasian Economic Union (EAEU) and Iran, reported the Akorda press service.

The interim agreement was signed on May 17, 2018, in the capital of Kazakhstan. It entered into force on October 27, 2019, with a duration of three years. The goal of the agreement is to develop and strengthen trade relations between the EAEU countries and Iran.

The trade turnover between Kazakhstan and Iran in January-April 2022 totaled $253.2 million, which is 43.3 percent higher than in the same period of the previous year ($176.8 million).

Exports from Kazakhstan to Iran in January-April 2022 increased by 44 percent and measured up to $175.7 million.

Earlier, the Mazhilis, the lower house of the Kazakh Parliament, endorsed the prolongation of this agreement anticipating the disruption of the preferential trade regime.